The flagbearer of the NPP, Nana Akuffo Addo has angered his party’s supporters in Dunkwa On Offin today when he sent his campaign visit to the Upper Denkyira East constituency. The npp Supporters were appalled at the treatment meted to them by the Flagbearer of their Party and according to the supporters, they waited for the party’s flagbearer since 9am in the morning with brass band and other jama groups to give him a rousing welcome but to their surprise and dismay, he was very late as usual and when Nana Addo eventually arrived at 4:30pm, he spoke for just three minutes and unfortunately, a lot of the supporters gathered did not hear his speech due to his voice so many started leaving the rally grounds.

What irritated some of the supporters to the core, was the statement made by Otiko Djaba who said that Muslims in Dunkwa On Offin should not look at President Mahama as their own but should look at Bawumia who is a Moslem. According to the supporters, that statement was in bad taste because they recall the treatment meted out to Alhaji Aliu Mahama who like President Mahama should have been the Flagbearer of the Npp after H. E. J. A. Kufour but it didnt happen so many begun to question the sincerity of the New Patriotic Party and advised themselves with the saying that if you don’t know death then look for a burial ground.

Floating voters and many undecided voters in the Upper Denkyira East constituency have made up their minds to vote out the NPP Member of Parliament-Nana Amoako, who has been in Parliament for so many years but have nothing to show for and were contemplating on voting for the NDCs Hon Emelia Ankomah who as MCE, has lobbied for several central Govt projects to every part of the constituency which is impacting positively on the citizenry. 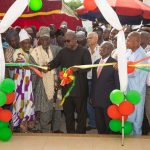