The unfortunate death of the Member of Parliament for Abuakwa North, Joseph Boakye Danquah Adu has become a great worry to Ghanaians mainly politicians.

The NPP is in a state of mourning after their member was stabbed by an unknown assailant in his home at Shiashie in Accra, Tuesday morning.

JB Danquah’s death also came as a jolt to President John Dramani – after describing him as a ‘brother’ despite their political affiliation.http://ghanapoliticsonline.com/

General Secretary of the NDC, Mr. Johnson Asiedu Nketiah, despite their political differences, appears traumatized over the MP’s shocking death.

According to him, the late MP – “Was a deep thinker and a good person” in the NPP – adding that – “I never met him in parliament but the little I know about him is phenomenal.”http://ghanapoliticsonline.com/

Speaking on NEAT FM’s morning show ‘Ghana Montie’, the NDC’s chief scribe, who called for maximum security for all MPs, was however against suggestions that MPs must own guns to protect themselves from such unfortunate happenings. 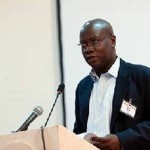