The Founder and leader of the newly formed political party, All Peoples Congress (APC), Mr Hassan Ayariga has declared that there will be no more “jokes” during this year’s electioneering campaign as was witnessed in the 2012 elections.

Touted with his humorous pronouncements during the last presidential elections that earned him the nickname “Ayaricough”, Mr Ayariga who recently broke ranks with the Peoples National Convention (PNC), a political party on whose ticket he contested the 2012 presidential elections said people have misconstrued his attempt at humour as a joke.

According to Mr Ayariga, as a presidential candidate, “you must give people the opportunity to believe in you, to understand that you are a man of peace.”
He insisted that at age 40 that is when life begins so people will tell you that, “life begins at 40.”

He said if you don’t understand the concept of Ayariga’s political ways, “you need to get closer to me and you will understand that the best man for Ghana is Dr Hassan Ayariga.”

Mr Ayariga left the PNC to form the APC after he was defeated by Dr Edward Mahama at the party’s presidential primary last year.

He is an accountant, entrepreneur and politician and his father, Frank Abdulai Ayariga was a member of parliament for the Bawku Constituency during the third republic administration of Dr. Hilla Limann and his mother Anatu Ayariga, a business woman.

He spent his childhood in Accra and Bawku and later moved to Nigeria with his parents after the overthrow of the Limann Administration.

He attended Ghana Secondary School and then Barewa College in Zaria when he moved with his family to Nigeria. He later gained admission to the London School of Accountancy where he studied accounting.

At the 2012 presidential electioneering campaign, he was noted for attacking the main opposition political party and its leader, Nana Addo Dankwa Akufo Addo.

When in a recent radio interview, he was asked why he did that instead of attacking the ruling party just like all the other opposition parties were doing, Mr Ayariga explained that he strategy was to become the main opposition leader. 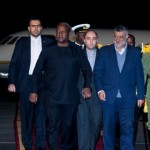