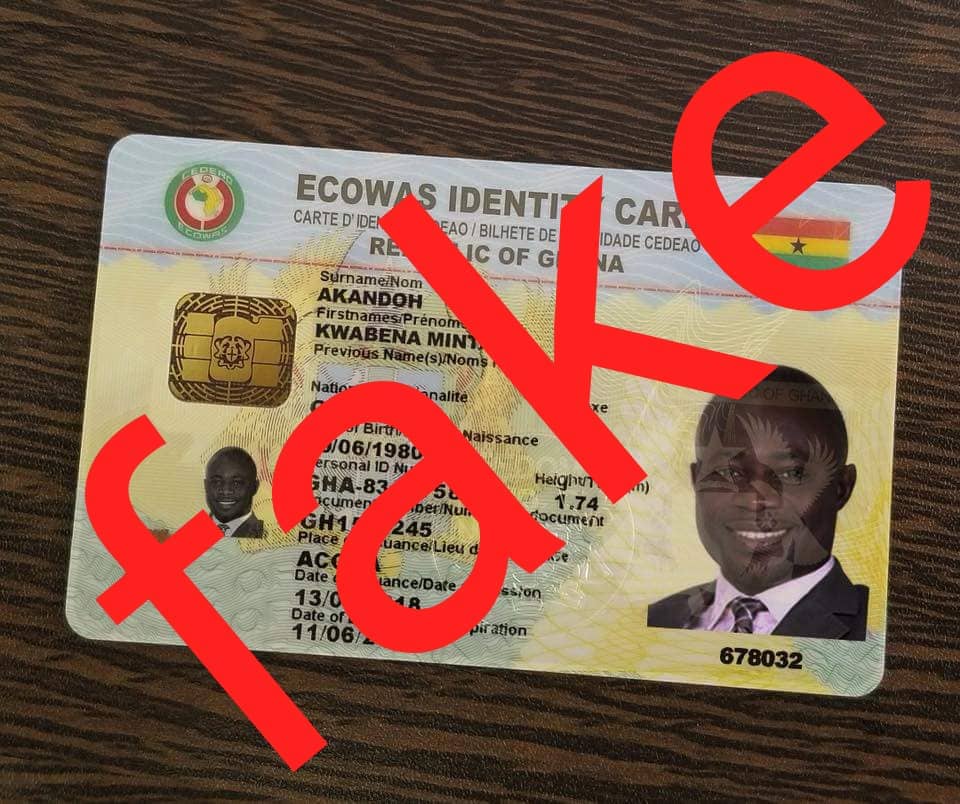 The National Identification Authority (NIA) has denied ever registering some members of the Minority in Parliament for the Ghana Card.

The Minority has distanced itself from the exercise until voter’s ID cards are accepted as one of the requirements for the national card. However, pictures are circulating on social media purporting to be photos of Ghana Cards issued to some Minority MPs by the NIA.

The said MPs have denied knowledge of the cards and have threatened to sue the Authority if it does not clear the air.

The NIA has, however, issued a statement clarifying that no member of the Minority side of Parliament is on its database let alone issued with a Ghana Card.

“The purported Personal Identification Numbers on the cards fall completely outside the unique ?numbering system and scope of NIA. The pictures on the cards also don’t conform to NIA picture requirements,” the Authority said in a statement.

The National Identification Authority (NIA) has noticed with profound regret pictures circulating on social media purporting to be photos of Ghana Cards issued to some Minority Members of Parliament by NIA, following their alleged secret registration for the cards. The NIA wishes to put the following facts on record for the attention of the general public:

1. NIA has no evidence of having registered any Minority MP;

2. NIA has not issued a Ghana Card to any Minority MP;

3. NIA has no evidentiary basis to consider that it issued the purported Ghana Cards;

4. Neither the A.g Executive Secretary nor any NIA authorised Registration Official has anything to ?do with the creation and circulation of the said pictures which can only be photoshoped.

5. The purported Personal Identification Numbers on the cards fall completely outside the unique ?numbering system and scope of NIA.

6. The pictures on the cards also don’t conform to NIA picture requirements.

7. NIA is acutely mindful of its obligations to respect and protect the integrity of all personal data ?entrusted into its care by the citizenry. Effectively ensuring all-round compliance with data ?protection laws and policies will remain a core concern of NIA; and

8. NIA is a creature of statute and is determined to obey the existing laws of the Republic of Ghana ?in implementing the National Identification System Project. It has no need to, and will never resort to any unfair, devious and illegal methods of persuasion in its bid to get all Ghanaians to register for the Ghana Card to ensure social and economic inclusion.

The Authority therefore states emphatically that the said CARDS ARE FAKE and should be disregarded. The security, confidentiality and protection of all data in our custody therefore remains assured.?While this statement is meant to deny the Authority’s knowledge, involvement or connection with the fake cards, the Authority will soon issue a comprehensive statement covering the technical and operational processes involved in the issuance of the Ghana Card.