As Ghana continues to search for a lasting solution to the current power crisis, Deputy Finance Minister, Mona Quartey says the painful crisis has been a learning curve.

She noted that the crisis, which has been lingering on for the past four years, has had dire consequences on the citizenry and the country at large.

“There’s been a lot of irritations because let’s say at home, you don’t even have a fan to use, you can’t cook, you have to throw food out and so forth. At work, of course cost of production will go up because you have to buy fuel for your generator,” Mona Quartey observed.

The Deputy Minister pleaded that Ghanaians need to put the current challenges in context, that with a little bit of patience, things will pay off. “There’ve been a lot of effort to try and resolve this issue and I think that no one can fault this government.”

“No one government enjoys dumsor. It doesn’t work for anybody. Whether you are in government or out of government,” she said, but noted that Ghanaians need to start paying realistic prices for power because of the new generation capacities.

“It takes effort, it takes some serious decisions being made and some finances to get these plants on board,” she added.

The Minister said, “We’ve learnt our lessons,” and the crisis is improving. “it’s improved a lot so increasingly it’s going to get better and better as the second barge kicks in.”

Government, according to Mona Quartey, is now involving private sector participation in the operations and management of the Electricity Company of Ghana (ECG) to improve efficiency. 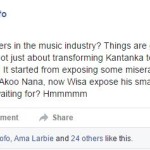