Chief Executive of GRIDCo, William Amuna explains that: “We have some excess…Asogli is not on stream now and when it comes [on stream] it means we will have a lot more power. We have had 110megawatts excess since 29 July when we stopped load shedding, but occasionally within a vicinity, you could have power going off but on the whole there is no load-shedding in Ghana,” he explained.

The 110megawatts excess is at peak periods when demand rises to 1,800 megawatts. He, however, explained that the number of generation units at the Akosombo Dam have not been increased but expressed optimism that the water level in the dam will rise once the rains become consistent.

“We have not increased the number of generators at Akosombo even though the rains have set in,” he said in an interview with Accra-based Joy FM on Monday August 15.

Critics, in the past few months, asked the government to be upfront with Ghanaians about the resurgence of the power crisis, but authorities insisted the situation had not reached the level that required the publication of a load shedding timetable.

Ghana experienced four years of erratic power supply that led to the collapse of some businesses and retrenchment of workers in some cases. The problem eased after the arrival of two emergency power ships at the beginning of 2016. 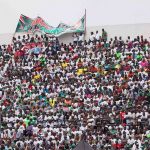