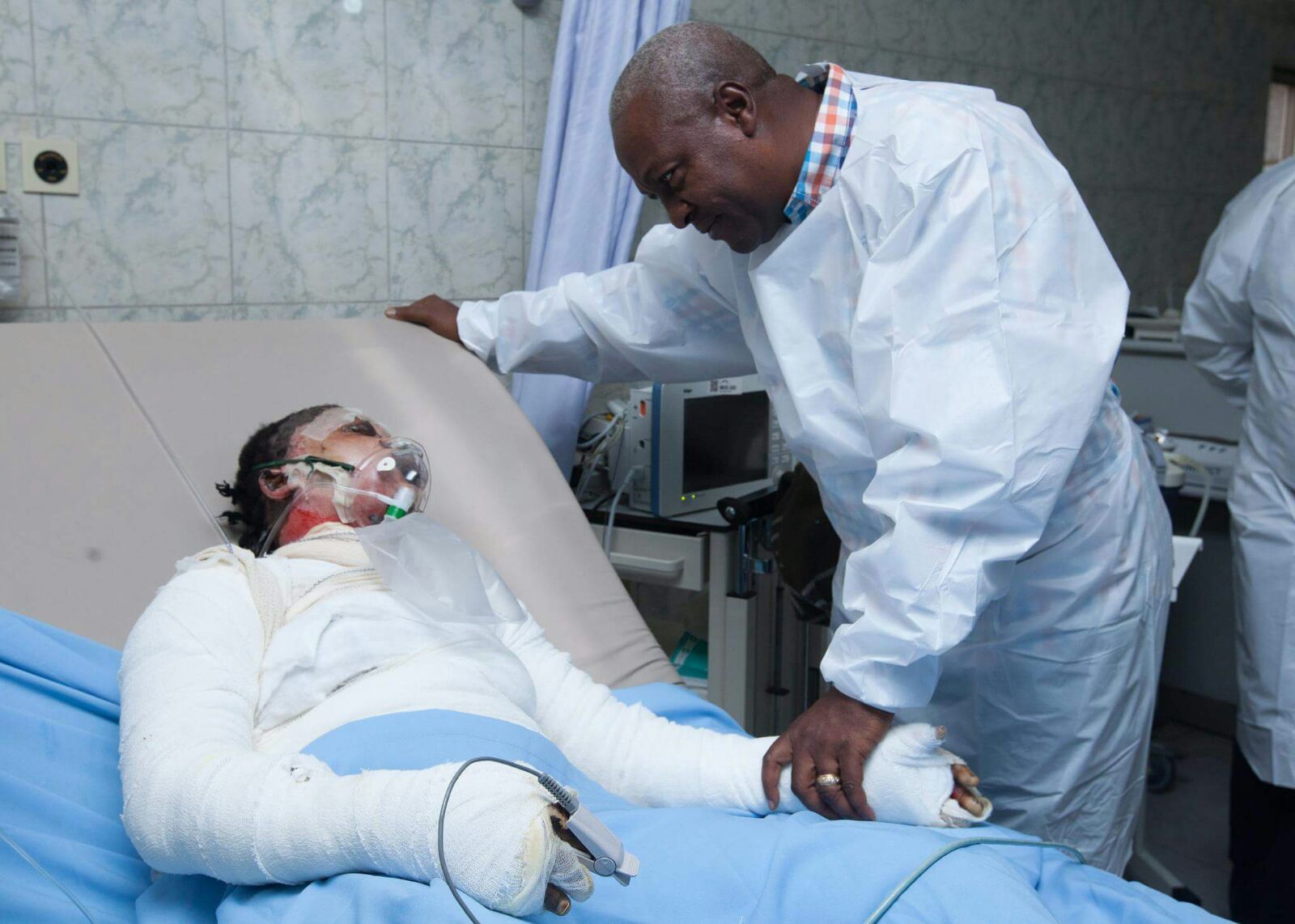 His name was Prince Anthony Opoku Acheampong. He was a 70 year old man. He was someone’s elder and loved one. He is now a corpse. Rejected by hospital after hospital due to lack of beds; from the Adabraka branch of C&J Hospital, Korle Bu Polyclinic, the Korle Bu Teaching Hospital, Police Hospital, Trust, Ridge Hospital and finally Lekma Hospital – he would finally die in his car.

For days, across media we have listened to stories by Ghanaians about their loved ones and the myriad ways in which Ghana’s crisis of a health care system has speeded up death due to deficits – of beds and of quality health care.

Prince’s emergency is the latest of a series that have hit the headlines.

We have wailed as Adolf Lawson, a father who, in July of 2017, lost his 21 year old daughter due to Accra based Ashongman Hospital’s refusal to give her blood – even though he and his daughter were both blood donors. He ran from Ashongman to Amasaman hospital; they had no blood. It was on to Achimota hospital to get that blood. Finally, he got it. By the time he got back, his daughter – Sophia Lawson, a level 300 student at Catholic University – was dead.

We have wailed as Sefakor, a mother, whose baby, Prosper, had his oxygen supply devastatingly cut off due to a lack of funds – a mere GhC533. That was in April this year at St. Gregory’s Hospital, Kasoa in the Central Region.

We have wailed at this wasted loss of life. We must shift our lens to discuss the particular wahala of this issue.

The ‘wahala’ is that it has been called ‘No Bed Syndrome.’

Is ‘No Bed Syndrome’ really a syndrome? Or is it the accumulated crises of poor quality health care, a failure by successive administrations to strengthen and expand our healthcare infrastructure with a specific lens of the needs of a growing capital city population?

It is not an actual syndrome; it is a story we have created as a frankly inadequate explanation for the utter neglect of this sector – even as politician after politician articulates how they will better resolve this crisis.

Ghana’s health care is a living horror story. There is no comfort in repeating this truth.

This latest medical scandal is about the challenges with seeking emergency care.

One specific issue is how we define ‘emergency’.

We are an Oga nation. ‘Ogas’ are big men and big women. They have wealth, power, and influence and are often recognizable. Ogas are not subject to the treatment, systems, restrictions faced by millions of regular Ghanaians. With that in mind, the question is how are medical facilities defining emergency? Is it about the seriousness of the patient’s medical condition showing up at their facilities requiring treatment – or is it about the status of the person showing up?

This is a valid question. It occurred to me as I listened to Mr Kpemka.

With the ‘no bed syndrome’ dominating our headlines, Deputy Attorney General Joseph Dindiok Kpemka, an MP for Tempane shared his own story of loss. On the Parliament floor, he shared how he “drove for seven good hours” trying to find a hospital bed for his sick wife. He finally contacted the Ridge Hospital director who managed to secure him a bed. Sadly his wife would die the following day.

The point here is that a bed was found in the same hospital in which there was no bed. Was it found because someone had overlooked its presence or was it because this man was able to use his influence and contact a hospital director? So the hospital did not seemingly respond to the emergency presented by this gentleman’s wife’s need for treatment – they responded to his status.

Emergency care implies that all emergencies are treated the same. Clearly that is not the case in Ghana. This must be part of assessing our medical failures in this space.

There are only 55 ambulances in Ghana. This is part of our emergency deficit. We learned this lack of beds is a crisis 10 years in the making. However when politicians were campaigning to win votes to secure power, monies was found and paid to brand 116 metro mass transit buses in order to help secure victory. That was back in 2016 and a cool GhC3.65m was spent. The scandal would claim the resignation of the then Transport Minister and a public outcry. What medical equipment could have been secured with this same money?

The response to the call to build more medical structures, strengthen health care facilities is so often a lack of funds. This particular deficit suddenly disappears when politicians need money to boost campaigns to secure votes.

This is a question too of urban planning.

Accra is a city with more and more luxury buildings. There are new hotels for those with the wealth and means to stay in luxury. Drive around Accra and spot unfinished buildings, languishing unused and unoccupied. In the midst of this sprawling metropolis, a 70 year old man finds neither care, nor respite.

For local MPs and indeed the Mayor – whose duty is to serve the citizens of a city- is it not past time for a dedicated emergency facility in Accra with trained personnel to ensure such an incident never occurs again?

Focus on consequence is valid. It is making headlines because of the seeming callousness of imagining an elder moving from hospital to hospital desperately seeking care and finding none.

We have had multiple discussions regarding deficit of care by both nurses and doctors. We will sadly – but necessarily – revisit those discussions. They are usually triggered by loss of life or horror treatment in tragic and avoidable circumstances. We have regularly lamented loss of life due to lack of care, neglect, incompetence or a disregard for life and a privileging of profit.

Cumulative contradictions arise from multiple crises and they dominate our health sector.

Senior politicians flying out of Ghana to get health care abroad means their privilege protects them from the horrors facing those they represent. It has been said often, it bears repeating – we the citizens of this nation must demand an end to politicians escaping this nation to be treated in other nations that have created a functioning health care institution.

The syndrome that afflicts us is not a lack of beds; it is the lack of will to change what is absolutely changeable about our health care system.

What cure for that syndrome?

The Lawyers vs. The Investigative Journalists

Anas’s Number 12 continues to create conversation regarding investigative journalism in Ghana and its future.

I am committed to being part of expanding discussions on what is a crucial tool in the fight against corruption. It is a specific tool in a journalist’s arsenal of weapons when it comes to this thing we call journalism.

I was honoured to be a panelist at ACILA (Africa Centre of International Law and Accountability) thought-provoking panel: ‘Undercover Journalism: The Ethics, The Public Interest and The Law’ on Tuesday 12th June. The panel featured Nii Kpakpo Samoa Addo – a private legal practitioner; Zakaria Tanko Musah – a Lecturer at the Ghana Institute of Journalism; George Sarpong Executive Secretary of the National Media Commission and was moderated by Joy FM’s Evans Mensah. There was the launch of investigative journalist fund – the ACILA IJFund.

There is an ongoing contentious issue of undercover filming as part of investigative journalism.

Lawyers invite us to question and explore whether corruption was ‘uncovered’ or ‘created’. Such passionately and eloquently made arguments are important and valid in the world of law. They must be rightly contextualized and scrutinized within this world of investigative journalism.

Arguments made within a legal frame are valid. That does not mean they apply within an investigative journalistic frame. This clarity matters. As discussions are ongoing, my continual call is for clarity and not conflation of these two issues.

We must not allow the persuasive power of eloquent lawyers to hijack a necessary discussion regarding investigative journalism.

It is not our work to provide the kind of proof that may lead to conviction. A lawyer’s assessment of a case is different than that of a journalist weighing the strength of information and then having to make an informed decision regarding what the industry describes as ‘fit to publish’.

Lawyers’ questions offer us in media a welcome opportunity to strengthen our arguments for this work that sometimes requires this most intrusive and contentious of weapons known as undercover filming. Any opportunity to sharpen our journalistic tools must be welcome. We must though recognize that we are in a fight to defend our right to access tools that the law may deem problematic, but are crucial in this fight against corruption.

There is indeed a relationship between investigative journalism and the law.

There will always be a tension between the two – that is a good thing. I am not suggesting we do not interrogate or scrutinize the methods used by Anas – or any other investigative journalist – regarding undercover filming. We must ask tough questions regarding funding. It is legitimate to explore issues of inducement – and this question of ‘uncover’ vs. ‘create’.

The most ethical investigative journalism will include a resource of lawyers. As a trained investigative journalist, it was routine to face lawyers and explain why you wanted to go undercover, what information you were trying to acquire, show that you had exhausted all traditional journalistic means to acquire that information and that your filming would be restricted only to specific areas.

Let’s continue this discussion. It strengthens us all.

Coalition Against Sexual Abuse (CASA) campaign STOP SEX ABUSE in SCHOOLS! is in partnership with ‘Let’s Talk Consent, ‘OdodowGH’ and EAA Media Productions. CASA seeks to engage additional organizations for partnership and participation. The hash tags across social media for this campaign are:- #SilenceBreakersGH and #TimesUpGH. For more info contact casaforjustice@gmail.com.

The Coalition Against Sexual Abuse (CASA) is an action and advocacy group of concerned citizens of Ghana committed to ending sexual abuse, sexual violence and sexual harassment in the country. CASA’s focus is impactful campaigns, citizen engagement, media and policy in this work. CASA works to educate Ghanaians about sexual abuse; to advocate for victims; to push for sensible legislation and enforcement against perpetrators; to engage the media in reform, language and their power regarding sexual abuse. CASA collaborates with other groups and individuals committed to ending sexual abuse.