RECENTLY, the Korean Cultural week was celebrated in Nigeria’s political capital, Abuja, with government officials, diplomats, cultural administrators and enthusiasts as well as friends of Korea in Nigeria in attendance to share their cultural values. The festival, which lasted for eight days was an all-encompassing cultural event that featured traditional Korean musical troupes; “Nanta and Yeorang,” performing both traditional and modern songs at the opening ceremony.

Flagging off the festival which turned out to be an avalanche of Korean cuisine, music, films and performances, the Korean Ambassador to Nigeria Mr. Noh Kyu-duk said the occasion marks the 35th anniversary of the establishment of diplomatic ties between Korea and Nigeria. According to him, since the establishment of diplomatic relations with Nigeria in 1980, both countries have continued to foster strong political, economic and cultural ties.

He said Nigeria and Korea have had similar upheavals in their recent histories, adding that there is much both countries can learn from each other. “In the 20th century, Korea and Nigeria passed through very similar historical paths; colonial rule, civil war, military coup and other difficult times. Nevertheless, we are the people who have a great pride in our ancestors and history.

“And we are the people who are determined to overcome whatever difficulties we face and to write a success story for our future generations,” he said. Kyu-duk noted that Korea center established five years ago had secured a good foundation for cultural exchange of the two countries. He  stated that the coming into force of the agreement on cultural and educational cooperation between Korea and Nigeria was a good testimony to the deepening and widening of collaborations in cultural ties between the two countries.

In his remarks,  the Permanent Secretary, Federal Ministry of Foreign Affairs, Amb. Bulus Lolo, extolled the contribution of the Federal Republic of South Korea towards the growth and development of culture in Nigeria.  Lolo said Korean cultural festival had added element of sophistication to Nigerian culture having been the first country to bring Nigerians-Koreans together in a setting like this.

“Let me also salute your effort having been the first country to have diplomatic reception since President Muhammadu Buhari Inaugurates its cabinet.  “We assure you to explore way of bringing our people together and expanding the business relationship that exists.  “Korean culture is very rich and full of history I hope we shall continue working together to promote unity of the whole world,” he said. 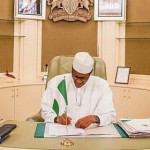