PRESS RELEASE
17TH JANUARY, 2017
NEGLECT OF THE VOLTA NORTH IN THE MINISTERIAL APPOINTMENTS BY THE PRESIDENT- BY THE NPP VOLTA NORTH YOUTH

We, the youth of the New Patriotic Party (NPP) in the Volta North, wish to express our unhappiness about the neglect of the Volta North in the appointment of ministers into the president Akuffo-Addo led government being formed. On Monday, January 16, 2017 edition the Daily Guide newspaper did a publication with the headline “Voltarians Laud Amewu, Dzamesi Appointments” at page 17 of the paper. The publication sought to portray that the entire people of the Volta region are happy about the two ministerial appointments.

The picture created in that publication does not reflect the feelings of the entirety of the people of Volta region. We, the NPP youth of the Volta North, are unhappy about how the appointments has been done so far. From the outset we would like to strongly state that we have no problem with the appointments of the ministers designate from the Volta Region in the persons of Hon. Peter John Amewu and Hon. Kofi Dzamesi. Our concern is that the Volta North has been ignored in this appointments.

It is so sad that the list of ministerial nominees which make up the main ministers released so far has no one from the Volta North. The two ministers designate who hail from the region all come from the southern part of the region. We consider this unfair and would like to bring this to the attention of the president, His Excellency Nana Addo Dankwa Akuffo-Addo and our dear party, the New Patriotic Party (NPP). Already, the party grassroots in the Volta North are beginning to be agitated about the situation. People are asking whether history is going to be repeated.
The Volta North has always remained faithful to the Dankwa-Busia political tradition, but, unfortunately we have not been rewarded accordingly anytime the tradition got the opportunity to form government. We are often forgotten when it comes to major ministerial appointments. We would like to use this opportunity to draw the attention of the president, the NPP and the general public to some historical facts to buttress our point.

In the 1969 elections that brought the Prime Minister, Dr. Kofi Abrefa Busia to power on the ticket of the Progress Party (PP), majority of the votes (and for that matter Dr. Busia’s votes) in the Volta region came from the Volta North. The Progress Party (PP) won only two seats from the Volta region and all came from the Volta North. Krachi Constituency was won by B.K. Mensah and Krachi –Nkwanta constituency was won by R.K. Mensah, all on the ticket of the Progress Party (PP). Sadly, none of these personalities were considered for any major ministerial appointment in Dr. Busia’s government, despite the fact that the Second Republic was a parliamentary system of government and all ministers were to be selected from parliament.

Again, in this 4th Republic, the Volta North suffered the same faith during president Kufuours’s presidency. The majority of votes for the NPP in the Volta region in both the 2000 and 2004 elections, came from the Volta North, yet we were not considered for any major ministerial appointment. During this period it was the same Volta North that won a parliamentary seat for the party in Nkwanta-North. We could not protect this seat because of the party’s neglect. We lost the seat in 2008, and only God knows when the party will reclaim this seat.

In the just ended 2016 elections, the Volta North has kept faith with the NPP in the Volta region once again. Majority of NPP’s share of the votes in Volta region, again, came from the Volta North. However, no person from the Volta North has been nominated for appointment to any of the major ministries. The main ministerial nominees has been completed and once again Volta North has been ignored. As usual, the only parliamentary seat won by the NPP in the Volta region came from Volta North, that is, the Krachi East constituency.
We find this practice discriminatory, unfair and seriously demoralizing. What have we done such that we continue to be ignored by our own party? The voting trend in the region points to a direction that indicates that in the shortest possible time the Volta North would become a stronghold of the New Patriotic Party (NPP). But the party is not taking steps to grow the party in this part of the region. We are on course to breaking the monopoly of our main political opponents in this part of the region, but, our efforts are being ignored. Is it that our efforts for the party are not being recognized? Why are we being treated this way? This treatment is seriously thwarting our efforts in growing the party in this part of the region.

We call on you Your Excellency, not to repeat the mistakes of the past. Our people are becoming disappointed in the manner in which the party is treating them. Give us hope your Excellency by giving Volta North its fair share of ministerial appointments into your government. We have been loyal to the Dankwa – Busia tradition in this part of the region, all we ask for is that this loyalty should be recognized, appreciated and compensated. We think it is not late, please we are counting on you, Your Excellency.
Thank you.
CONTACT PERSONS
KRACHI EAST CONSTITUENCY
Abubakar Salifu Constituency Organiser 0244 258126
Gyamfi Boateng Former Constituency Organiser 0247 105468
Owusu Samuel Former Constituency Secretary 0249 124681
Frank Awuah
TESCON PATRON
Dambai College of Education 0243 638841
Lambert Ahiadzu
TESCON PATRON
Dambai College of Education 0244 986036 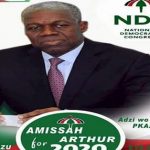