According to him, contrary to what members of the NPP believe that the seat is a no go area for the NDC, Mr. Adams said they will win the seat come November 2016.

He said his party’s inability to file consistent candidates underscore the NPP’s belief of the constituency belonging to them.

Speaking on his party’s decision to withdraw from the Abuakwa North bye-election, Mr. Adams said the NDC took the decision because it does not want to deepen the grief of the bereaved family of the late J.B. Danquah Adu.

Also, he said the party does not want to take advantage of the current situation to wrestle the seat from the NPP.

“We want to give him some due respect”, he said and that the party does not want to be seen engaging in a political huddle.

Mr. Adams intimated his party’s interest is to contest and win the seat in the November 2016 election. 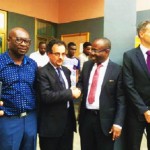