The Chief of Staff Mr. Julius Debrah has stated that the ruling National Democratic Congress (NDC) shall retain all eleven seats in the Upper West region in the upcoming December 7 elections.

“My six-day working tour of the region has boosted my confidence into believing that not only would we win all eleven seats but to as well maximise the votes of our Presidential candidate President John Dramani Mahama.

“All the traditional authorities I visited acknowledged the fact that the NDC government under President Mahama has brought development to their area, and this gives me hope for Dec,” he said.

The Chief of Staff, represented his boss the President who is on an international assignment to explain potions of the manifesto to the Chiefs and people.
He also took the opportunity to engage the rank and file of the party, visited project sites toured constituencies and assuring the gathering of more development in the second term of President Mahama.

The chief of start among other areas paid courtesy calls on the WA Naa, Wicheau Naa, Dorimon Naa the Nadowli tradional council.

He also visited ongoing projects at Doble where a 30 unit market is almost complete and the about 98% completed community day senior high school in Luggor in the WA East district.

A lot of communities have been connected to the national grid, most roads have been tarred, CHP compunds, nursing training colleges, water provision, among others are the achievements by government which has won the hearts and minds of the people.

“I am very convinced that the Chiefs and people of the Upper West Region would retain the NDC for a second term to enhance the economic well being of the people,” Julius Debrah said.

He therefore urged the NDC in the region not to leave anything to chance “let’s intensify our campaigns, campus to campus, market to market, shop to shop.

“We have an attractive record of achievement and our manifesto is promising therefore go all out to woo more people especially the first time voters to vote for John Dramani Mahama and the NDC,” The Chief of Staff noted. 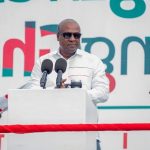