The Ashanti Regional Youth Organizer of the National Democratic Congress, Brogya Genfi has vowed to campaign against the registration of the country’s identification project dubbed ‘Ghana Card’.

He explained that, Ghana’s High Commissioner to South Africa George Ayisi-Boateng’s recent comment suggesting that NPP supporters are more Ghanaian than others has compelled supporters of the opposition NDC to withdraw from the national identification registration.

“We don’t see ourselves as Ghanaians under this government,” he said.

He was emphatic in an interview with Peacefmonine.com that “Some key members in the NDC including myself will officially launch the campaign so that the so-called non-Ghanaians as claimed by Ayisi-Boateng will not partake in the registration process.”

The aspiring National Youth Organizer of the NDC in a Facebook post also challenged President Nana Addo Dankwa Akufo-Addo to with immediate effect release Ayisi-Boateng from his post or face the wrath of his party followers.

“If President Akufo-Addo wants us to register to hold a Ghana Card, then he must first fire Ayisi-Boateng,” he said.

George Ayisi-Boateng has come under intense pressure to resign after telling the governing New Patriotic Party’s tertiary arm, the Tertiary Students Confederacy (TESCON) in Kumasi two weeks ago that members of his party are his topmost priority before any other Ghanaian.

The statement attracted a deluge of criticism from the Minority in parliament, several civil society organisations as well as former President John Mahama who recently said President Nana Akufo-Addo should have fired Mr Ayisi-Boateng after he made that statement. 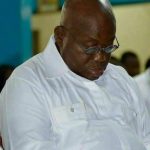