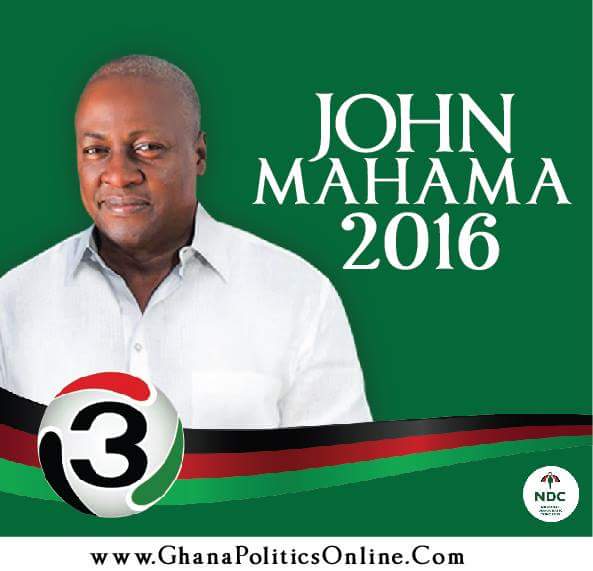 President John Mahama has declared the commitment of the National Democratic Congress (NDC) to accept the results of the upcoming general election and challeged the opposition parties to do the same.

Chiding opponents of the NDC for preparing the grounds for a disputed general election, President Mahama said with defeat staring at them, the opposition had created the impression that the EC was going to steal the election for him.

“I can see this is what they are doing. Every day the Chairperson of the EC is under attack. They say she is going to rig the election for John Mahama. Never, never”, he said in a speech while campaigning in parts of the Greater Accra Region last Saturday.

“But let me assure all that the elections are going to be free and fair and the NDC is going to accept the results and so they (opposition) should also accept the results”, President Mahama said as he addressed chiefs and boisterous NDC supporters at various stops,.

He condemned the constant verbal attacks on the Electoral Commission (EC) and its chairperson by some political parties, saying those attacks are a deliberate attempt by those parties to dispute the results of the December 7 general election.

He said those perpetuating such attacks were not confident of their chances at the polls and, therefore, had resorted to constant attacks on the EC as a ploy to prepare the grounds and create an impression for disputed election results.

The President’s first stop was Kpone, where he addressed the Kpone Katamanso Traditional Council and a mini rally of party supporters before moving to Tema.

President Mahama’s appearance in the Port City saw hundreds of party supporters pouring out to meet him.

Backed by Shatta Wale’s “Mahama Paper” song booming from loud speakers mounted on vehicles, some of the party supporters took to the streets before the arrival of the President.

And when the President finally arrived, the atmosphere became charged.

The mood of the big crowds was festive. As the crowd cheered, President Mahama said, “As Commander-in-Chief of the Ghana Armed Forces, l will ensure that the elections are conducted in a peaceful atmosphere”.

But he warned: “Anyone who tries to create a state of insecurity in the country will not be spared”.

He said the processes laid out by the EC for the elections were transparent and political parties must allow the processes to flow.

He gave an assurance that in his next term of administration, Tema would regain its lost glory.

Outlining some of the initiatives to bring the industrial city back to life, he said the government had initiated a $1.5-billion port expansion project which would create 3,000 new direct jobs.

He said the Tema Oil Refinery (TOR) which had collapsed had been revived and making giant strides, while the Bulk Oil Storage and Transport (BOST) Company was up and running, exporting petroleum products to Burkina Faso, Mali and Niger.

Touching on roads, President Mahama said Accra, Tema, Kpone and Ashaiman were going to witness major road works covering about 400 kilometres, adding that the Tema Motorway had been earmarked for expansion into six lanes.

He said the Tema Motorway Roundabout was going to be developed into an interchange, while three overpasses would be constructed across the motorway to ease transportation.

Additionally, he said, as part of the port expansion project, the Port Hospital Road would be expanded into a dual carriageway.

The President said before his next term would end in 2021, the Tema General Hospital would be upgraded into a first-class facility.

He said before the end of this year, two new cement producing factories would be inaugurated to help provide jobs.

President Mahama said just as Dr Kwame Nkrumah invested in infrastructure, in spite of the numerous criticisms from the then opposition United Party (UP), he was committed to developing not only Tema but Ghana as a whole and would not be daunted by the criticisms of the main opposition party.

In the area of education, he said the government, through the Tema Metropolitan Assembly, had constructed six modern industrial city basic schools to help eradicate the shift system.

He gave the assurance that the sewer challenges facing the people of Tema would be addressed, while the central business area would be redeveloped to befit the area as a port city.

President Mahama turned his focus on firing up his supporters.

He said he was not nervous about the outcome of the elections because he knew God had already crowned the NDC with victory.

“In the last four years, we’ve done all the difficult work in order that the economy will stabilise and Ghana will grow. We’ve laid the foundation and what is left is putting the blocks on the foundation”, he told the supporters.

Making reference to the Akan proverb, Woforo dua pa a, na yepia wo, to wit, “When you climb a good tree, you are given a push”, President Mahama said he was hopeful that once he was working for a good cause, the Ghanaian people would support him to complete his work by re-electing him.

He spoke in four languages — English, Twi, Ga and Hausa — and his fluency in all excited the crowds who cheered him. 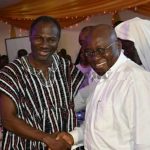