The National Democratic Congress has vowed to take punitive measures against parliamentary aspirants who fomented trouble in Saturday’s nationwide presidential and parliamentary elections .

The elections, though largely successful, were not without pockets of violence in some constituencies across the country.
The most notorious of the constituencies was the Ningo-Prampram constituency where the ‘father and son’ contest turned violent.

Sam George had vowed to unseat his mentor, the person he had campaigned for in previous elections, ET Mensah, but the contest was riddled with violence, accusations and counter accusations.
Sam George claimed his name and thousands of his supporters had been deleted from the register and also made claims of assault against him, kidnap against two of his supporters by persons associated with the incumbent MP who is seeking his fifth term.
The MP however denied all allegations against him and threatened legal action against George whom he also accused of lying and making unfounded allegations.
The Ningo Prampram elections have been rescheduled to Sunday, with national executives hoping tempers will subside.
The violence was not limited to Ningo Prampram. There were cases of attempted ballot box snatching, allegations of vote buying etc.
Speaking to Joy News, the National Chairman of the party, Kofi Portuphy said such violence and lawlessness will not be countenanced.
“When the reports come we have to verify them. If they are true i will be very surprised. I am surprised some people are doing that.
“In national elections we don’t campaign on [elections day] We are investigating. If we find out that you have offended the electoral rules you will be sanctioned,” he said.
The elections saw many casualties to incumbent MPs. The biggest was Nii Armah Ashietey who was beaten by Dr Zanetor Rawlings. 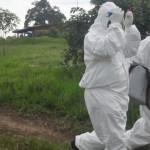