The Chief of Staff , Mr Julius Debrah, has signalled that the ruling National Democratic Congress (NDC) is leaving no stone unturned to capture the Suhum Constituency seat.

He has, therefore, urged the incumbent Member of Parliament (MP) for the constituency, Mr Opare Ansah, to brace himself up for the challenge, since the NDC is very poised to capture the seat.

Mr Debrah said this when he addressed party faithful at the official campaign launch of Ms Margaret Maago Ansei at Suhum in the Eastern Region.

He stressed the need for party members to rally behind Ms Ansei for a one-touch victory in this year’s election slated for December 7, 2016.

The Chief of Staff expressed confidence that she was going to grab the seat come December 7, saying, “This year’s election in the Suhum Constituency would be keenly contested by the NDC.”

The National Campaign Coordinator of the NDC, Mr Kofi Adams, said the presidency was a seat for serious-minded politicians and not a place to undergo trials.

He, therefore, advised the electorate to vote based on competence and not on the grounds of “trial and error”.

He said the Mahama-led NDC government had gained the necessary experience over the years and laid a better foundation for progress in the coming years and thus needed to be given the nod come December 7.

He said the government had provided a lot of development projects for the people of the Eastern Region and added that he was confident those projects would translate into votes to retain the party in power.

The Eastern Regional Chairman of the NDC, Mr Tawiah Boateng, said the people of Suhum had witnessed the provision of development projects in education, health, roads, as well as water and sanitation.

He expressed happiness that the Akote community had now been connected to the national grid,after many years of being in darkness.

He said the NDC government was on the verge of initiating more projects such as a community day senior high school for the people of Nankese and would soon award a contract for the construction of the Akrabo-Supresu-Kukua-Mangoase road.

She called on the electorate to come out on election day and vote massively for her and President Mahama. 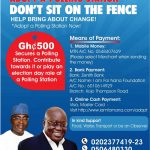