Officials of the National Democratic Congress are contradicting themselves over the suspension of two of the party’s parliamentary candidates Sam George and Nii Amasah Namoale.

While, the Greater Accra regional executives of the party insist the Ningo-Prampram and La Dadekotopon candidates are suspended for misconduct, a deputy general secretary of the umbrella family George Lawson says national executives are yet to take a decision on the matter. He told Starr News complaints against the two have not gone through the various channels of considerations by the party.

Meanwhile, a statement by another deputy general secretary of the ruling Party Koku Anyidoho said the issues are still under review.

“The Functional Executive Committee (FEC), of the National Democratic Congress (NDC), is by this Release, putting it out that, the issues relating to Nii Amasa Namoale and Sam George, as presented by the Greater Accra Regional Office of the Party, are under review per the rules of practice “.

The two candidates were suspended by the regional executives for misconduct. The letter announcing the punishment for George read : “I have been directed by the Regional Executive Committee to inform you about your suspension from the party with effect from 1st December, 2015 pending the hearing by the disciplinary committee in line with the party’s constitution.

“On Novermber 21, 2015, you contravened article 41(3a) and 40(8b and C) when you instigated people against the regional executive monitoring team and granted interview to the media accusing the regional executives of perpetrating fraud to the benefit of your contender. The Disciplinary Committee will contact you” 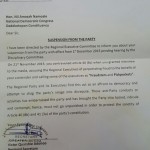