Tension is brewing in the Agotime-Ziope Constituency of the National Democratic Congress (NDC) as elders and youth of Ziope raise a red flag over impending parliamentary primary.

The tension is arising from an alleged breach of a convention, which provides for the alternation the two core positions of Member of Parliament and District Chief Executive between Agotime and Ziope.

This convention, according to the concerned Ziope elders and youth, have seen the election of Hon. Juliana Azumah Mensah, a native of Agotime as MP since 2004 while the current DCE position is being occupied by a Ziope native.

With the incumbent MP bowing out of parliament in January 2017, it is the turn of Ziope aspirants to contest for the slot they argued.

But at the close of nomination last Thursday, two aspirants from Agotime have filed to contest with the sole Aspirant from Ziope.

An action, the elders and youth of Ziope are describing as a betrayal of the convention and could mar the cordiality between the two communities forming the District.

Addressing a press conference on the matter, Mr. Francis Kwaku spokesperson for the concerned Ziope elders and youth is calling on the leadership of the NDC to prevail on Agotime to respect the convention for peace in the District and to consolidate the gains of the Party in the Constituency. 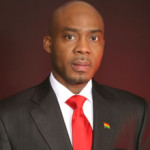