Sam George who is a presidential staffer is contesting incumbent MP ET Mensah and Michael Kwetey Tetteh in the constituency primary fixed for November 7.

The petitioner, Oko Mensah claims Sam George has not been an active member of the NDC in the constituency for the minimum four years prescribed by the party’s constitution.

He told Joy News’ Kwakye Afreh-Nuamah that Sam George “was coopted as a communications member for one branch” in the constitutency only in 2014.

The petitioner also felt the aspirant flouted the rules when he printed his campaign poster with the image of the president, when he has not been elected, just to prove to the delegates that he has the backing of President Mahama.

“What we are calling for is that he is not qualified as we have stated,” he said.

Sam George has however downplayed the petition.

He said he has read the laws of the country, guidelines and constitution of the party and was certain that he has not “fall foul of any of the rules of engagement”.

Aside not residing in the area for more than four years as the petitioner argued, Same George pointed out “I hail from Ningo and that is enough to qualify me to contest”.

“If he produces a membership card that dates back as far as 2010, 2008 then he is qualified per our constitution or guidelines,” he noted.

The vetting is scheduled for Friday October 9. 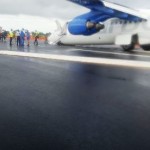