A total of 107 candidates vying for the National Democratic Congress (NDC) parliamentary primaries in the Greater Accra Region are expected to face the vetting committee of the party today and tomorrow.

Out of the total number of candidates from 34 constituencies in the region, 16 of them are sitting Members of Parliament.

The vetting, which will be held at the residence of the Greater Accra Regional Minister, Joseph Nii Laryea Afotey Agbo, will see each candidate being given six minutes to talk about their contributions to the party.

Immediately after the vetting process, candidates would be made to know whether they have been given the green light to contest or to try again in four years’ time.

He also said the Ashaiman Constituency recorded the highest number of seven candidates filing their nominations.

Touching on some of the key areas that the vetting committee would be looking out for, Mr Adonoo said the candidates would be queried on the party’s ‘code of conduct’.

“How long a candidate has served the party will be a key determinant of whether or not he or she qualifies to contest the election,” he said.

Apart from the four-year membership requirement, candidates ought to provide proof of their contribution to the growth of the party.

“You must be an active member of the party,” he added.

Mr Adonoo said after the vetting, the delegates’ album would be made available to candidates two weeks before the November 7, 2015 election day.

He also said the party would have 6,000 polling stations across the country on the Election Day.

Mr Adonoo advised the candidates not to think of filing as independent candidates in case they were disqualified because “it shows a clear disrespect for the party’s code and conduct”.

The voting patterns for the two main political parties —NDC and the New Patriotic Party (NPP) — in the Greater Accra Region indicate that it has always been a close contest in the last three elections.

Even though the party was still in opposition in 2008, the NDC managed to increase its percentage to 52.11 out of the total number of 2,514,739 registered voters, with the ruling NPP settling for 46.03 per cent.

In 2012, however, the NDC, which had been elected to form a government, had dwindling fortunes in the Greater Accra Region with 52.31 per cent of the votes, while the opposition NPP increased its stakes by snatching 46.92 per cent votes, which was a slight improvement over its performance in 2008.

As the 2016 election year approaches, the two parties’ wil be engaged in yet another contest to ascertain which party will emerge as the winner in the region. 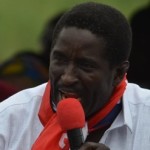