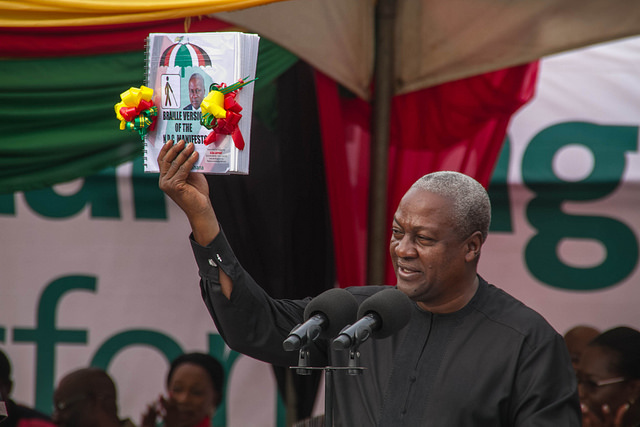 Ghana’s first visually impaired Minister of State, Dr. Danaa- Minister for Chieftaincy & Traditional Affairs, speaking at the ceremony.
Government says it recognises vulnerable groups as critical aspect of the country’s human resource base with the view that disability is not inability.

President John Mahama, stated this when he launched the Braille version of the NDC’s 2016 manifesto at the forecourt of the State House in Accra.

This is the first in the history of the country.

President Mahama also launched an exercise to distribute tricycles to the physically challenged.

Reports say immediately after President Mahama launched the document, two students of the Akropong School for the Blind, Ebenezer Armah and Princess Mensah, read out extracts of the manifesto to the admiration of all gathered.

The NDC said it was using the Braille to underline the party’s commitment to its social democratic credentials.

“The NDC has always led the way in championing the cause of the disabled. We believe that disability is not inability,” President Mahama said.

In Ghana, persons with disability constitute three per cent of the national population of which four per cent are visually impaired.

President Mahama said the fact that the NDC government was the first to appoint a visually impaired person as Minister of State gave credence to its respect and precognition of the disabled.

The Minister of Chieftaincy and Traditional Affairs, Dr. Henry Seidu Danaa, who is also contesting for the Wa East Constituency seat, was described by the President as a very capable and hardworking minister who had helped Cabinet to become sign language compliant.

Expressing confidence that Dr. Danaa would win the seat, the President said: “I am sending a signal to Parliament to be ready to receive him.”

“Parliament will have to be compliant. The Hansard and other papers would have to be in Braille.” The president added.

Taking a look at the NDC 2016 manifesto, President Mahama said it spelt out various measures to push the interest of people with disabilities.

He said the NDC, in the next term, would encourage the learning of sign language at the various levels of education to improve communication in the sign language.

President Mahama said over 10,000 disabled persons had been registered freely to benefit from the National Health Insurance Scheme, while about 4,000 of them had been drafted into the Youth Employment Agency (YEA).

Those with the YEA, he said, would not only learn various skills to make them self-reliant but would also earn incomes.

“I have asked the YEA to employ a further 6,000 to make it 10, 000,” the President said to applause from members of the disability community gathered.

The Minister of Gender, Children and Social Protection, Nana Oye Lithur, said 52,082 persons with disabilities were benefitting from the Livelihood Empowerment Against Poverty (LEAP) program.

She said the government would continue to pay attention to the unique needs of people with disabilities.
For his part, Dr. Danaa described the launch of the Braille version of the NDC manifesto as a great event in the country.

“The launch marks another milestone because it indicates clearly the way forward in the actualisation of the social democracy principles of the NDC,” he said.