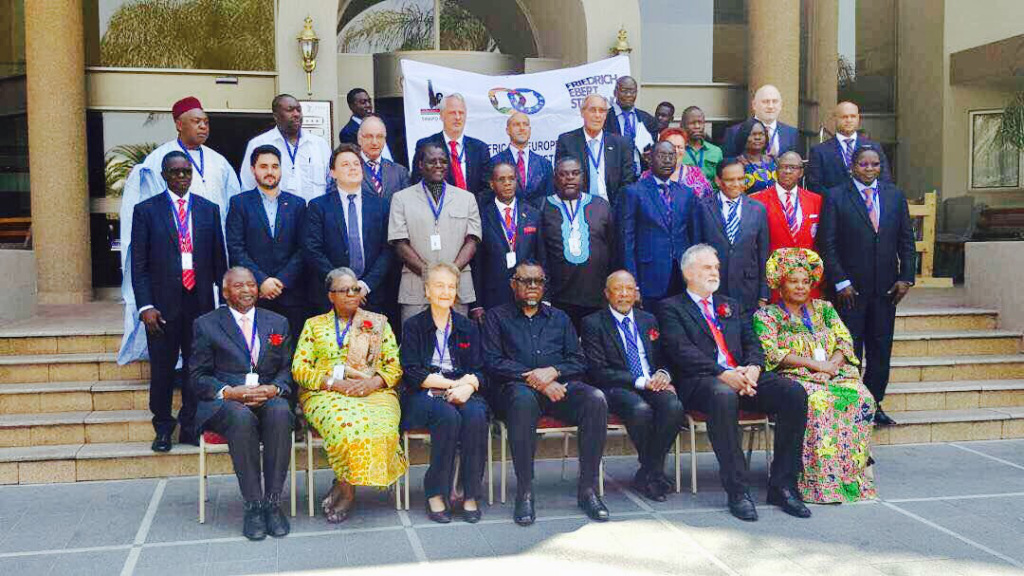 The National Democratic Congress (NDC), is in Windhoek, Namibia, to participate in the first ever Africa – European Party Dialogue of Socialists and Democrats to be held on African soil.

Group pix of Namibian President and Leaders of the various country delegations.
The governing SWAPO Party in Namibia, in collaboration with the Friedrich Ebert Stiftung of Germany, is organizing the Dialogue under the theme: “Overcoming Inequality As A Political Challenge”.

The two-member NDC delegation that is participating in the high level Dialogue, is led by, comrade Koku Anyidoho, Deputy General Secretary in-charge of Operations, and he is accompanied by, comrade Dr. William Ahadzi, Director of Research as well as Acting Rector of the NDC’s Party School.

Koku Anyidoho and Dr. William Ahadzie.
In his Speech to officially kick-start the Dialogue, President of Namibia, His Excellency Dr. Hage Geingob, commended the Organisers for choosing Namibia to host such an important Dialogue by African and European Parties that believe in the Left and Center of Left divide of politics.

President Geingob appreciated the support given Namibia during the struggle for independence, and Namibia’s strong commitment to also lending its support to the fight against social inequalities that are stifling the growth of nations and states.

Dr. William Ahadzie.
The 2 day Dialogue, will see participating countries delving into issues such as; 1. Gender Inequality in the 21st Century, 2. Youth Empowerment and stemming the tide of youth unemployment /migration, 3. Inequality and its impact on security and public safety, 4. Inequality vis-a-vis economic relations between Africa and Europe.

The NDC delegation will be presenting a Paper on the topic of “Inequality And Its Impact On Security, Public Safety And Migration”.

Koku Anyidoho in a handshake with the President of Namibia, His Excellency Dr. Hage Geingob.
26 African countries and 14 European countries are in Windhoek to participate in the Dialogue.

Belgium, Denmark, Georgia, Germany, Italy, Netherlands, and Switzerland, are some of the countries representing the European contingent.

Namibian President & General Secretary of SWAPO singing the Namibian National Anthem.
Based on its Revolutionary antecedents, the NDC in 2002, officially joined the world-wide League of Socialist Political Parties known as Socialist International (SI), and has since been an active member of SI.

Indeed, at the last Assembly of SI, General Secretary of NDC, comrade Johnson Asiedu Nketia, was overwhelmingly elected as 1st Vice Chairperson of the Socialist International.