Nana Akufo Addo’s defeat in the 2008 presidential election was due to his failure to appoint Hajia Alima Mahama, a former Women and Children’s Affairs Minister, in the erstwhile Kufour administration, as vice presidential candidate, a man of God has revealed.

Pastor Kwabena Agyekum, Head Pastor of the Emmanuel Temple Church, said, Dr. Mahamudu Bawumia a former deputy governor of the Central Bank who is partnering Nana Addo for the third time, was not the appointed candidate for Nana Addo at the time.

According to him, Dr. Bawumia was not destined to partner Nana Addo. Pastor Agyekum said, Hajia Alima Mahama was the best choice for the NPP in the 2008 election and should they have settled on her, they would have won the polls.

He said, although Dr. Bawumia was not Nana Addo’s best partner, he has stand the test of time and have been given the light to ensure victory for Akufo Addo in 2016. Dr. Mahamudu Bawumia and Nana Addo he stressed, are holding the Presidential Staff and come January 7, 2017, they will be sworn in as President and Vice. 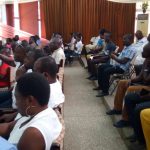