Communications Director of the ruling New Patriotic Party (NPP) Nana Akomea has said, the comments by Senior Minister Yaw Osafo Maafo about the probability of government using the Heritage Fund to support Free SHS policy was just his suggestion.

“This were words of the Senior Minister thinking aloud”

Couple of days ago, Senior Minister Yaw Osafo Maafo was reported to have said government would champion a review of the Heritage Fund component in the Petroleum Management Act (Act 815) in order to fund its flagship policy.

According to the Senior minister, “this had become possible because the government wants to invest a significant revenue generated from the oil industry to finance key programmes and bolster sectors of the economy.”

Furthermore, NPP MP for Obuasi West, Kwaku Kwarteng, has said government had not taken any definite decision to tap into the Fund.

However, the ruling party’s communicator, Nana Akomea, on ‘Newsfile’ today seconded the stances of Mr Kwarteng and said the Senior Minister was expressing his thoughts on the subject and not communicating the government’s final decision.

“The Finance Minister had clarified the situation…we are all waiting legally for the funding sources,” he stated. 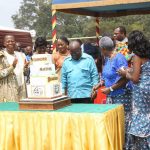