Nana Akufo-Addo has recently been heard on several campaign platforms pleading with Ghanaians to “try him too” for the presidency come November.

The strategy has been criticised as lacking direction and the policy alternatives needed to persuade the average Ghanaian voter.

“It is in all humility that we give respect to the voters. They have the power and if you want them to give it to you, you beg them and you appeal to them. Elections are done in a multiplicity of ways so if we are doing one thing; that is pleading for votes, it’s just one of the many things the party is doing,” he stated.

Nana Akufo-Addo will face-off with his old political rival President John Mahama of the ruling National Democartic Congress in the November Presidential and parliamentary polls. This is his third shot at the Presidency. 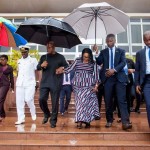