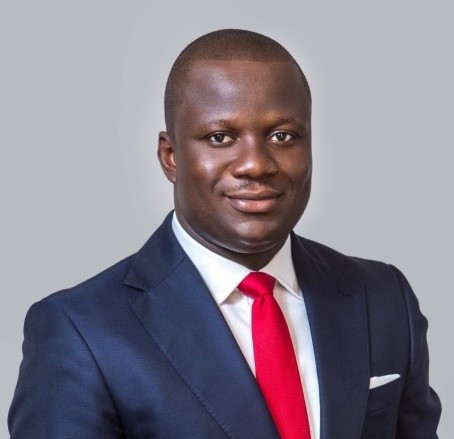 The landscape of Damongo, a popular town in the Northern Region, is enjoying a small facelift, thanks to a beautiful villa allegedly belonging to a deputy Chief of Staff, which is mushrooming rapidly to nourish the panorama.

A two-storey semi-detached, the house, which easily qualifies as a status symbol for the rich, is said to belong to Mr. Samuel Abu Jinapor.

The architectural aggrandizement is already at the roofing level, just 10 months into the administration of President Nana AKufo-Addo and the New Patriotic Party (NPP) government.

Photos of the villa rotating on social media show that its accessories include a concrete fence-wall that is gated with a Roman-style archway, which opens into a large patio as it adjoins what looks like a small security post.

Sources say there are plans to pave the building’s driveway with fine marble as part of the grand architecture.

Speculations are rife as to the amount that Mr. Jinapor, whom musician and NPP activist, Kwame A-Plus, has described as one of two deputy ‘Thieves-of-Staff’ forked out to get the beautiful edifice built for him.

Observers are however united in the opinion that the building has mushroomed rather too quickly, having been forged from foundation to roof level just nine months into the administration of the NPP; especially so, when it is public knowledge that a broke government has not been able to keep up with the payment of salaries of appointees.

Mr. Jinapor has however issued a statement claiming he does not own the house and that it is an allegation by his political detractors. However, sources maintain he is the owner of the villa.

As one of the supposed deputy ‘Thieves-of-Staff,’ however, he has recently dominated headlines for his embroilment in alleged corruption, including thievery.

“NPP delegates congress…. 7 months of NPP government. So far so good except appointing some very corrupt officials including the two very stupid deputy chief of staffs. It’s amazing how Nana was able to appoint thieves whose level of stupidity is the same. Arrogant and corrupt fools. You think you’ll be in power forever. Even John Mahama I was not afraid of him then you,” had posted in a Facebook rant.

The allegation had sparked a war of words with the deputies, especially Asenso-Boakye, whose counter allegation of blackmail against A Plus, had spiraled the public spat into revelations that Abu Jinapor had had a corruption escapade at the Ghana Shippers Council (now Shippers Authority).

According to A Plus, Mr. Jinapor ought to have walked a tightrope because the only reason his misdeeds had not been exposed in the public domain was that Asempa FM, a radio station based in Accra, had agreed to a cover-up.

A police investigation that had eventually been attracted into the scandal led to revelations that apart from the Shippers Council, Abu Jinapor also had dirty footprints at the Korle Bu Teaching Hospital, where he allegedly took bribe to defend the interest of a bank.

The police soon came out with a release dismissing the allegations against Abu Jinapor in respect of Korlebu as baseless, however, it has since emerged that supposed investigations that the Police had conducted into the allegation was a sham.

A secretly recorded conversation between A Plus and one of the investigating Police officers, ACP Tiwaa Addo Danquah, revealed that the police had intentionally overlooked evidence of corruption against Abu Jinapor and Asenso-Boakye at Korlebu.

Meanwhile, as he serves just a heartbeat away from the President at the Flagstaff House as a deputy Chief-Of-Staff, allegations by ruling party insiders that the President’s cousin, Gabby Asare Otchere-Darko, takes bribes as precondition to meet with the President, naturally rub on Samuel Abu Jinapor.

According to the NPP Pastor, Bishop Isaac Owusu Bempah, who has been corroborated by the NPP’s MP for Assin Central, Kennedy Agyapong, Mr. Otchere-Darko takes between $20,000 and $30, 000 as “gate fee” from prospective investors before way is paved to see the President.

As the government is broke and defaulting on the payment of the salaries of appointees, it is said that such bribes and per diems from traveling with the President, among other dirty perks, are what appointees, especially those at the Flagstaff House, live on.

In fact, the need to harvest per diems is said to be so pressing that whenever the President or his Vice are scheduled to travel abroad, a rat race breaks out with appointees jostling in a dog-eat-dog competition to make the retinue list.

This is why people in Damongo are shocked that Samuel Abu Jinapor, a deputy Chief of Staff, is allegedly able to put up such an expensive villa for himself in the Northern Regional town, in spite of all the austerities in government.

But in response to the concerns, Mr. Jinapor has issued a statement claiming he does not own the mansion.

“My attention has been drawn to a deliberate and vile propaganda circulating on social media to the effect that, I am building a “magnificent villa” in Damongo, in the Northern Region, as part of an alleged ambition “to annex” a Parliamentary seat.

“For the records, I do not own any landed property in Damongo. Again, I am not building a “mansion” there either. These widely circulating claims, yet again, fit into the grand scheme by full-time detractors to soil my reputation. I, therefore, entreat all and sundry to completely disregard this wicked propaganda,” the statement claimed.

But the claim has annoyed sources who say they are lacing their boots to publish more evidence.