He stated that he has no doubt that the ruling New Patriotic Party (NPP’s) government will change the fortunes of the country to inure to the benefit of the many Ghanaians who voted for the party.

Speaking on Ultimate Breakfast Show hosted by Lantam Papanko, he expressed optimism that the calibre of ministers designates assembled by the President will deliver on their mandate.

He admitted the former President John Mahama did his best to turn things around, but believes the current President will not disappoint Ghanaians for reposing confidence in him.

Mr Akpaloo called on the ministers who will be approved by Parliament to help push the vision of the President forward.

‘I believe in Nana Addo’s government. Mahama did his best but an Akufo-Addo government will do far better than former President Mahama that is what am expecting. Because if you look at what Akufo-Addo has started, it means he is going to do well.

One, look at the kind of people he has assembled, and this was done within one week of climbing the presidency, he has the best brains to help him execute the job. And I know they are all poised to do the best for this country. I know they are ready to work for this government. I am expecting Akufo Addo to deliver,’ he expressed hope.

He stated that he will work hard to see the President succeed if he is appointed to either head the Ghana Revenue Authority (GRA) or Security and Exchanges Commission (SEC).

He doubted if the NPP will fail Ghanaians asking ‘do you think Alan Kyeremanteng, Kan Dapaah, Ken Ofori Atta, Otiko Djaba, will not deliver?, these are men and women with lots of experiences, they have gone through the mill’.

Mr Akpaloo indicated that any appointee who fails will be booted out to pave for others.

‘Nana Addo wants to leave a legacy, so he will not allow anybody to joke with his government,’ he emphasised. 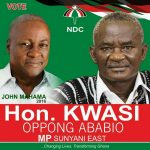