Wa Central Member of Parliament (MP), Rashid Pelpuo believes the mantle of governance has blinded the New Patriotic Party (NPP) government and its leader, Nana Akufo-Addo, to acts of corruption.
Mr. Pelpuo said this to highlight what he called double standards exhibited by the NPP on matters pertaining to corruption.

Speaking on The Big Issue as the world marked International Anti-Corruption Day, the MP made reference to President Nana Akufo-Addo’s endorsement of the founder of the Jospong Group of Companies, Joseph Siaw Agyepong.
He reminded the NPP that it had accused the National Democratic Congress, when it was in power, of “dealing with Zoomlion [which is owned by Jospong] in ways that they deemed were corrupt.”

“After all these condemnations of the NDC’s dealings with Zoomlion and then sending out a journalist to prove it and the journalist comes with some proof. At the same time, the one who led the campaign against us [the NDC] and against corruption, citing Zoomlion and ourselves as being corrupt came to say, I am praising this man.”
NPP lacking ‘moral grounds’

Mr. Pelpuo said the simple explanation for this turn of events was that President Akufo-Addo “no longer sees corruption now that he is in the seat and he can no longer see Zoomlion as the corrupt [company] they saw [in opposition].”
The NPP preached numerous anti-corruption messages en route to winning the 2016 elections and according to a number of observers, the government seems to be fulfiling some of the promises it made in that regard.
Parliament recently passed the Special Prosecutor Bill which will open what is hoped to be a non-partisan avenue for probing and prosecuting allegations of corruption within the government structure and beyond.
The NPP has sent out signals to the effect that it will go after corrupt officials within the past NDC government but Mr. Pelpuo held that the NPP government is incapable of following through with such pledges.
“I am just waiting to see them call any NDC man to say, you are going to court because they don’t have the moral ground to do so,” the NDC MP stated. 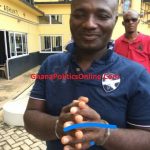