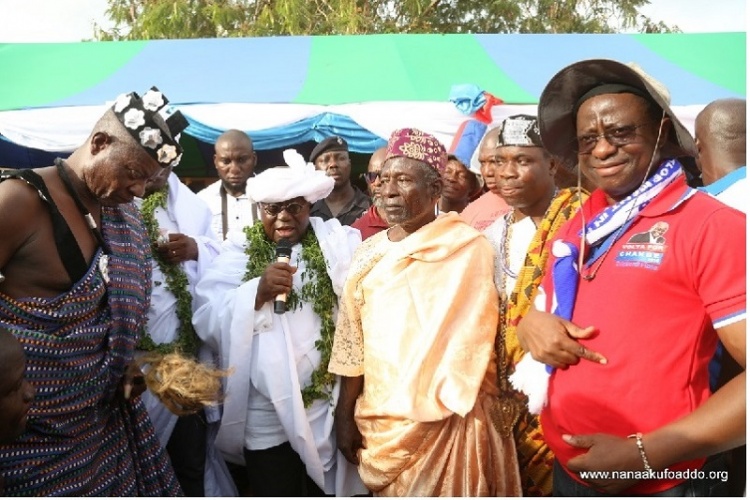 As the fraudsters parading themselves as Chiefs, across the length and breadth of the country increase their scope of influence, Ghanaians are daily beginning to lose respect for traditional authority.

There was an advert not too long ago that goes like ‘some things are for men only’. We can all hope and aspire, dream we can, but not every wish list, is to be granted.

Nana Addo Dankwa Akufo-Addo, was in Afloa in the Volta Region, as part of his campaign tour a fortnight ago, some chiefs decided to make a mockery of him, when he was dressed like a fetish priest and conferred with a chieftaincy title.

Nana Addo, deserves more than what he was made to go through, he was dressed like a clown and paraded around town, and he was also beaming with smiles.

In fact, politics and political power, have reduced men to something else, who would have thought that, Nana Addo, could allow himself to be treated the way, some chiefs in Aflao did.

He saw nothing wrong with it, he had leaves hanging around his neck, I was so flabbergasted and shamed, thinking to myself, what men will do for power.

Since the 70’s, at least, Nana Addo Dankwa Akufo-Addo, claims he has been in the forefront of restoring multi-party democracy. He gives, he takes; he creates, and lately since becoming the leader of the New Patriotic Party, he destroys, so imagine my surprise when I saw pictures of him being mocked in public.

In many of those pictures, you could see how uncomfortable Nana Addo looks. Nana Addo’s silence and acceptance of that charade is about power. It is about control. It is about hubris. Superciliousness, even. And it says a lot about the manner of man he is.

Between 2001 and 2008, this country has been on the path to damnation, when President John Agyekum Kufuor and the New Patriotic Party, were in office, they acted as if they knew it all. But more than anything else, corruption, incompetence, waste and excesses, became a part of our national/political culture.

President Kufuor, along with the likes of Nana Addo, were the grand patrons and granddaddies of all that went wrong with Ghana.
But today, Nana Addo, goes around pontificating and sermonizing. Ironically, the gullible are lapping up every word spoken by The Kings and Queens
of Wrongs.

How do you please Nana Addo? The Chiefs and people of Aflao, have found the remedy for Ghanaians, at least before his last fight, crown him by awarding him a title, as a peace offering, so that he does not unleash his goons to turn this country upside after December 9.

Nana Addo, doesn’t think much of his predecessors, the current president, like those before him, have at one time or another been rundown by Nana Addo and his supporters, all in furtherance of his inordinate desire to become president.

Ex-president Kufuor, whom he served and together this country was raped, has not been spared either, Nana Addo, has made sure that, the man is never respected in his party, the party he led and arguably the most successful leader of the United Party (UP) tradition.

I though Nana Addo, was smarter than being allowed to be dressed like a clown and paraded in the streets, but as I mentioned earlier, what can’t human being possibly do for power.

Ghanaians have a date with destiny on December 7, do we want to maintain a humble, unifier, a man who has proven that, four years is long enough to make an impact in the life of your people, unlike president John Agyekum Kufuor, who said four years is too small to achieve anything.

President John Dramani Mahama, has not allowed himself to be embarrassed the way Nana Addo has just for power.

About a month ago, in the Ashanti Regional capital, Kumasi, a pastor almost pushed Nana Addo to the ground, because he was praying for him and prophesying that, he has a vision of the man ascending to the highest office of the land.

There have been many embarrassing moments for the 72-year old man, at a church programme organized in his honour, he was made to lie prostrate on the floor , whiles he is prayed for.

In Israel after the 2008 election, when he went to seek the face of God, a religious ceremony, where commuters place their one hand on a wall, Nana Addo, alone placed his two palms.

The most embarrassing for me is the spectacle in Afloa, I didn’t think it could get to this level, desperation for power, has reduced man to a baby, being thrown around.

The final embarrassment in the series will be on the eve of December 9, when the Chairperson of the Electoral Commission, will announce the winner of the polls, I don’t want to be anywhere close to where Nana Addo, will be, it will certainly be the final nail on the coffin.

Nana Addo is deluded. He still believes he is the agent of change and that Ghanaians are better off with him as their Commander-in-Chief, but the fact is, delusion itself, is a powerful barrier to change.