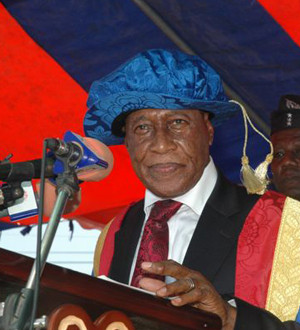 Renowned Ghanaian business mogul and a former Member of the Council of State, Dr. Alhaji Asuma Banda, has told Accra-based Television Station TV3, that the flagbearer of the New Patriotic Party (NPP) Nana Akufo-Addo can “never be President of Ghana.”

Alhaji Banda who was answering a question from Kwesi Pratt, the host of the station’s current affairs programme Hot Issues, argued that for one to be president he must possess some key qualities, which Nana Addo lacks.

“The truth is he [Nana Akufo-Addo] can never be president… You see, to be a President, you must have certain structure, intelligence,” he told Kwesi Pratt Junior in a teaser of the yet-to-be televised show.The former Council of State member buttressed his rather audacious statement by suggesting that, for someone to be a President he must possess certain qualities, which in his opinion included intelligence and wisdom.

“You see, people take certificates in the university to be intelligent, No! You must have wisdom. There are people in this country who want to even go to Parliament and they don’t have a sleeping place in that constituency and you want to be the father of the constituency” he asked.

It is unclear whether by the elderly man later stated emphatically that Nana Addo lacks the qualities he talks about.

Citifmonline.com cannot say whether the 82 year old man gave further explanations to buttress his statement since the statements were only couched from a teaser of the programme.

Nana Akufo Addo, has failed on two occasions in his attempt to lead the party, and will be making a third attempt in 2016, to unseat the National Democratic Congress (NDC’s) incumbent, President John Dramani Mahama.

Alhaji Asuma Banda, the first Chancellor of the University of Education Winneba, is also a known philanthropist, role model and a patriot.

His businesses have created employment for many in Ghana and beyond.

One of his known businesses, Antrak Air which started operations in September 2003 has been going through challenges and has currently suspended operations.