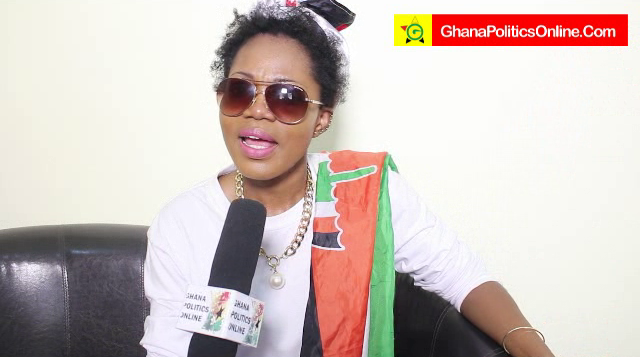 An angry female fan has allegedly pelted controversial musician Mzbel, with an egg while she was performing on stage.

The incident occurred at an event dubbed All White Party in Gent, Belgium on Boxing Day, December 26.

Some fans appeared to have difficulty separating Mzbel, the National Democratic Congress (NDC) political activist from Mzbel the entertainer.

She had said days to the December 7 general elections that the New Patriotic Party’s Presidential candidate Nana Addo Dankwa Akufo-Addo is not a presidential material.

He is now President after he defeated Mzbel’s choice and NDC presidential candidate John Mahama and Mzbel has been getting some negative reactions following her political gamble.

After the egg-throwing incident, a number of fans reportedly threatened to boycott the event if the singer was not dropped from the bill.

In spite of the threat, organisers went ahead with the event on Boxing Day.

In a live Facebook post by OldBoga Ghana, the MC for the event, condemned the attack on the musician.

The incident caused an abrupt halt of the show with several persons attending to Mzbel to ensure that she was unhurt. There was also some confusion on stage.

She could be later heard telling the crowd, in Twi that, the person has cursed her and urged that they put the incident behind them and continue the show.

“Are we going to do the show or not. Please can I perform or should I go home?” Mzbel kept asking on stage.

The singer, born Belinda Nana Ekua Amoah, after the December 7 elections alleged that supporters of the New Patriotic Party (NPP) made violent antics and threatened to beat her up.