Member of Parliament for the Ledzokuku constituency, Benita Sena Okity Duah says defeating NPP parliamentary candidate Dr. Bernard Okoe Boye in the 2016 general elections will be easier than the battle she fought to retain her party’s ticket.

Okity Duah beat her closest challenger Daniel Amartey Mensah and two other men by over 2000 votes to win the NDC primaries on Saturday.

In an interview with Citi News after her victory, she described Dr. Okoe Boye as a minor who is scared of her.

“I want to assure you that he is nowhere near me and he is even scared of me and I am going to make sure he is kept in the bush because I even dealt with a more stronger candidate. This is a baby and I am going teach him how to do politics.”

Dr. Okoe Boye in a rebuttal however said he is fully focused on winning the Ledzokuku parliamentary seat in 2016 despite Sena’s threats.

“She called me a baby and that is quite and derogatory but I have always told my people I am into politics, I want to do politics that is dignified. I don’t want to engage in unwholesome talk. Like I said the reason why I came into politics is to address these fierce problems in the community.

“I am not surprised she calls me a baby. When I was going for my primaries in the NPP, my opponents said similar things.I am not minded by talk. I believe in action and I am working on the ground. I know come 2016 my sister Sena will be in opposition.” 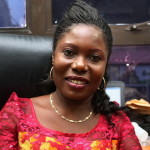