Finance Minister, Ken Ofori Atta said, Ghanaians must be in hurry to transform the economy which is in a very bad state.

Delivering his 2017 budget to Parliament today (March 2) he said, just like President Nana Akufo-Addo said in his maiden State of the Nation address to Parliament recently, that he was in a hurry, the entire country must also be in hurry.

He added that “we need to trigger a national sense of urgency to deal with our deficits as its continual presence curtails our capacity to leverage our many opportunities and resources that we have as a nation.”

According to the Finance Minister, the country cannot borrow its way out of this challenges as it would not be helpful to national growth.

“This would be tantamount to creating and sharing of poverty which only a means to a loss of our physical sovereignty,” he stated.

“So, like the President said, we must all be in a hurry to grow our way into prosperity and the budget would ensure that is done.”

His presentation to Parliament included, how the global economy performed in 2016, the medium-term outlook and the expected impact on the Ghanaian economy.

There was also a presentation on the micro-economic performance for 2016 against the target set and the President’s micro-economic target for 2017 and the medium-term targets.

He also spoke about some key sector deliverables in 2017 and provided key policy initiatives for 2017 and other highlights in the budget. 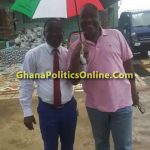