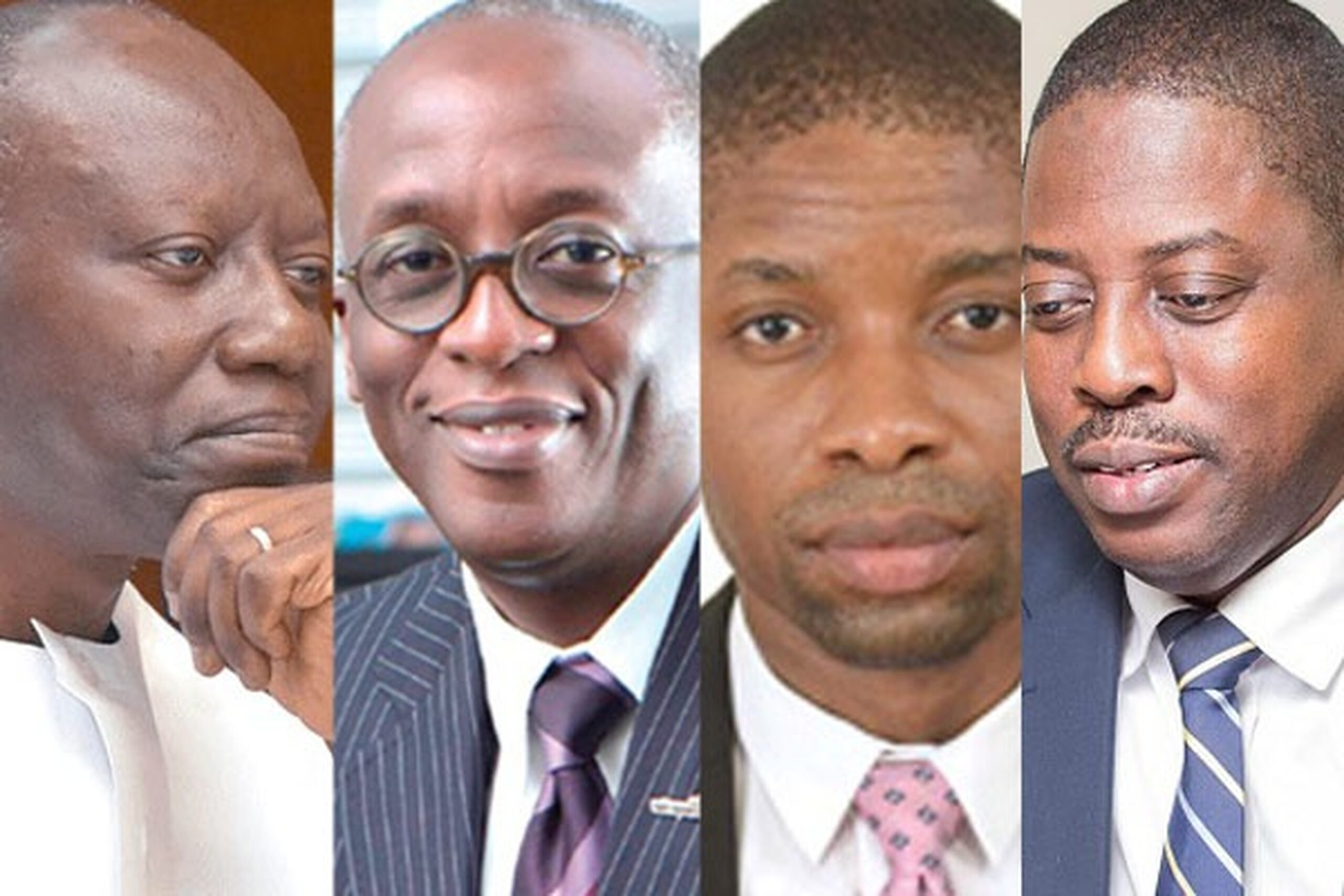 There had never been any minister under the forth republic saddled with multiple cases of conflict of interest as the Minister for Finance-designate, Ken Ofori-Atta.

The man who just returned from a medical trip abroad and looked visibly unwell, spent the greater part of his long-awaited vetting yesterday, answering questions about the involvement of his private businesses in several state transactions to the surprise of many watchers.

In the end, his vetting was truncated by the Chairman of the Appointments Committee, Joseph Osei Wusu to continue later today.

He had begged to be excused about three times to either use the washroom or just be excused for some minutes. There was even a two-hour break, the longest for any nominee for him, as well as the Members of the Committee to relax.

Sometime during his vetting, he suggested that he was doing a sacrificial job for the country because he is not on salary and had not been taking per diem or travelling allowance since taking the job in 2017, raising questions as to how he is able to keep himself, family and other dependents financially.

At stake were the appointments of several partners at Databank into several state institutions, including the Bank of Ghana, the National Insurance Commission, the Ministry of Finance among others also came to the light yesterday, but he justified them saying their experiences and qualifications must be the yardstick to determine those appointments, insisting they were not conflict of interest.

His Databank’s involvement in the Agyapa Mineral Royalties was mentioned, but he said the company has a 30-year experience as financial advisors and had started with a loan of US$25,000, but now controls some huge portfolio, therefore more than qualified for the job.

The location of the company which he said started from the Central Business district of Accra- Kantamanto, was also one of his biggest trump card, saying it had moved from a low street to a high-street.

His Enterprise Insurance Company, which has his wife Angela as director, was mentioned as having insured the government’s 307 ambulances for the constituencies and also insured health workers under government COVID-19 insurance policy, but again he says the company had been around for several decades.

Enterprise Insurance, is headed by his lifelong partner, Keli Gadzekpo, who is also a director of the Bank of Ghana and had served as Board Chairman of the Electricity Company of Ghana (ECG). Keli is also a co-owner of Databank.

Mention was also made of government procured loans that his Data Bank was involved in as financial advisors.

Also mentioned was his involvement in Aker Energy, which had persons connected to him.

KRL, an America Company and the McKenzie Group which are connected to him and dealings with the Ministry of Finance and the Ghana Revenue Authority (GRA) were also mentioned.

KGL Technology Limited which has some dealings with the National Lotteries was also mentioned by Alhassan Sayibu Suhuyini the National Democratic Congress (NDC) Member of Parliament for Tamale North as linked to him, but he only said he knew the owners.

But aside Keli Gadzekpo, Rev. Daniel Ogbarmey Tetteh, who worked with him at Databank, is currently the Director-General of the Securities and Exchange Commission, he was appointed to the position after Ken Ofori-Atta became Finance Minister in 2017.

One Sampson Akligoh, who was also at the same Databank with him as Director of Research, is currently the Director of Finance Sector at the Ministry of Finance and serves as a Board Member of the National Insurance Commission.

Samuel Okudzeto Ablakwa, MP for the North Tongu in the Volta Region, described these developments as a state captured of the Banking Sector, the Insurance Industry and the Investment sector by Ken Ofori-Atta and his men, but the nominee disagreed.

It also came out that the government is said to have borrowed over GHC22 billion from the Bank of Ghana to run the economy, but he insisted that the figure was rather GHC10 billion.

He said: “I think, really, there’s quite a bit of cynicism about that transaction and for me, for the house, for such a report to be put out in the public without us or myself, as Minister of Finance having a chance to discuss it, I think it’s a disservice to our democracy and that is such a fundamental right that I think we, all, as a people, should be careful about such things”.

Mr Ofori-Atta, who is also a co-founder of Databank, has said there was no conflict of interest as far as the investment and brokerage firm’s involvement in the controversial Agyapa deal was concerned.

Defending Databank’s involvement in the deal, which he said was clean and without any influence of his, Mr Ofori-Atta told Parliament’s Appointments Committee that: “In my situation, I truly do not engage in these procurements and transactions, as we think broadly on the economic freedom space for people, our international relationship to make sure that we get the best people. So, I can give you my commitment. Certainly, I’ve not been on the boards of Databank since 2014, 2012, I’ve retired from that. I think we built two great companies”.

In his view, the attractiveness of Databank is what has earned it places in government’s financial transactions for the past 14 years.

“I know that in my capacity as a public service official, who has been a director but co-owner of that company, I was not part of any decision-making with regard to that”.

“But I think we should be having, truly, a broader discussion about Ghanaian enterprise and, therefore, how independent and experienced entrepreneurs can join government at any point in time”, he proposed.

Demonstrating how meriting Databank was to have been landing such roles, he said: “So, here is a company that is 30 years old, that started by borrowing $25,000, that started – I guess Kantamanto is a place you’ll not think an investment bank can start – but this the resource the Ghanaian entrepreneur had to start that”.

“After 30 years, with 500,000 accounts of Ghanaians, a billion cedis under management, offices around the country, having participated in every Eurobond transaction since we started in 2007, are we truly saying that in the event of anybody becoming an Attorney General, you can’t use your other offices, in the event of being a Finance Minister, I think these are fundamental questions and, therefore, if the rules are clear on what you’re talking about, I don’t think we should encourage such cynicism because it just goes to poison the environment and then we lose”, he noted.

“I don’t think there was any conflict of interest; straight away, because I was not part of the decision. I think the first-class nature of that institution speaks for itself and the Ghanaian entrepreneurial ingenuity that has brought it this far, must be praised and we should be encouraging our companies to grow so that we can begin to do the Eurobonds ourselves”, Mr Ofori-Atta told the committee.

He also expressed qualms with former Special Prosecutor, Martin Amidu for publishing a damning corruption and anti-corruption risk assessment of the Agyapa deal without adding his input.

“The fundamental flaw in the approach that the OSP took with regard to whether he gave us a chance to respond or not and I think that should be of keen interest to this house as just a rule of law. And, so, to then go on to accept, acknowledge a document in which your citizens were not able to give their views on, I think it’s something that we should not encourage,” he complained.

“I do not feel that we broke any rule. I think the AG will be able to give you a firm assessment of that”, insisting: “I think such conjectures are inimical to growth and it does not help the kind of freedom, policy orientation and innovation that we require for this country to grow,” he added.

He said attempts to find outside-the-box ways of leveraging Ghana’s natural resources must not be impugned the way the Agyapa deal was, and asked the entire nation will come to terms with the reality of diversifying the country’s natural resources and leverage them into equity.

It is for this reason that Nana Akufo-Addo, has asked that the Agyapa Royalties agreement be resubmitted to Parliament, he told the Committee.

“What do we do with our natural resources to leverage it into equity? I think that is a question that we have to face,” he said.

He added “As to how that is mobilized and with the issues we contend with, I think that is the reason why the president wants us to submit to parliament.

“Philosophically, I hope we are all going to come to terms with the reality of diversifying how we capitalize and fund that transformation which we intend to do.”

President Akufo-Addo during his state of the nation address, said government would come back to engage Parliament on the steps it intends to take on the future of the Agyapa transaction.

The Agyapa Royalties deal generated so much interest from several quarters because of the alleged controversies of conflict of interest, amongst others.

The Special Prosecutor in a statement issued Monday morning [November 2, 2020] announced that he had completed the corruption risk assessment about two weeks ago and submitted his report to the presidency.

He took a swipe at the former Special Prosecutor, over the corruption risk assessment done on the Agyapa Royalties agreement.

He told the committee during his vetting that he did no wrong in the transaction yet Mr Amidu, failed to give him the opportunity to respond to the claims made against him in the report.

Mr Amidu claimed that the $1bilion mineral royalties agreement, could lead to corruption.

Mr Ofori-Atta maintained that the transaction was transparent and executed in consonance with the laws and procedures of the country.

He was reacting to what he described as the deficiencies and flaws pointed out by the Office of the Special Prosecutor in an Analysis of Corruption and Anti-Corruption Assessment conducted on the request of President Akufo-Addo.

In a response to President Akufo-Addo dated October 30, 2020, after Special Prosecutor Martin Amidu had submitted his work, the Finance Minister insisted that: “There is no justifiable reason for concluding that the current members of the MIIF Board will jeopardize their apparent professional integrity and reputations to engage in corrupt practices motivated by partisan considerations”.

The Special Prosecutor pointed out that the engagement of IMARA Corporate Finance Limited (Pty) (Imara), a South African firm, as Transaction Advisor did not receive parliamentary approval.

Additionally, the Special Prosecutor raised concerns about the partnership of Databank Limited and IMARA and the payment of $15,000 monthly retainer for 12 months during the evaluation and recommendation phase of the deal and $4 million as a success fee.

Databank was co-founded by Mr Ofori-Atta but he resigned from the firm years before taking up politics and being appointed as Finance Minister but his ties with the firm have raised questions in various transactions.

The Special Prosecutor believes the Deputy Minister of Finance, Charles Adu Boahen, did not have the authority to carry out and sign an agreement on that scale on behalf of the country but the Minister.

But answering questions during his vetting, Mr Ofori-Atta said “To then go on to accept, acknowledge a document in which your citizens were not able to give their views on that is not something we should encourage. We broke no rule and I think the Attorney General should be able to give an assessment on that. I do not believe that we broke any rule by the way which the procurement was done.”