Mugabe has finally resigned but he could have done so long time voluntarily which would have earned him much more cheers and ‘fans’, far more than what this later resignation has fetched him. Meaning, he had the option to take a glass-full but ended up not taking a full glass.

Analogously, Mugabe is like the main speaker at a gathering who eventually became boring to his audience. Not because his message wasn’t good but because he failed to realize when he should end his message. Right from when the first word was spoken, the audience enjoyed the message but later became disinterested because of the prolonged, monotonous, and even repetition of words.

Most times, when this happens at functions, organizers(most likely the MC) cut in and that moment is never a nice spectacle. One would have wished the speaker would know better to end the message at an earlier stage.

I have said this and I repeat:
A good leader should also preoccupy him/her[self] with who comes after him or her. [S]he doesn’t assume [s]he is the only good thing a whole country would ever have. And [s]he understands this not to mean imposing his or her choice. Power is sweet. When you’re good and your people see it too, the proclivity is that you would try to perpetuate your reign. Unfortunately, this is what some leaders have been infested with. But a good leader is only good, after him or her comes a better one and the former should look forward to that.

More essentially, I agree with Professor Ransford Gyampo when he seconded Obama’s admonition that, ‘Africa does not need strong men, the days of strong men are over, Africa needs strong institutions’ 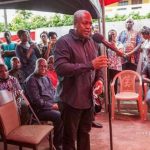