Documents from the campaign office of flagbearer of the New Patriotic Party Nana Akufo-Addo, sighted by the “Weekend Diary magazine” and labeled as ” ACCELERATION OF THE GHANAIAN ECONOMY IN THE FIRST 100 DAYS OF PRESIDENT AKUFO-ADDO” suggest the “uncompromised intention” of Nana Akufo-Addo, when elected as President of Ghana, to “rigidly cut down excessive waste” of Public purse and in “public services.”

A mention of the current salary structure of servicemen in the Ghana Police and Ghana Armed Forces in this documents iss described as “Excessive waste of resources with no commensurate output”, pages eight (8) of the documents reveals. To this end, Nana Akufo-Addo as stated in the Document leaked from his Campaign office, is not going to “compromise” on his “inflexible” decision to “cut down the abnormal salaries given to service men in Ghana Police and Ghana Armed Forces.” Also captured in this report is a “unsparing effort” backed by the “passing of a bill” that is going to supervise strictly the “identification and removal of ghost names” from the databases at the Controller and Accountant General Departments.

Nana Akufo-Addo has said that, he intends to introduce a “fair” and a “reasonable” system of remuneration and reward for services in the Ghana Police Service and Ghana  Armed Forces. An Akufo-Addo government, in its first 100 days, according to the documents was going to “accelerate” the functioning of the National Identification scheme for a “secured database” for investment decisions. Meanwhile, Akufo-Addo,  had stated recently in one of his campaign tours at the Volta Region that, he is inclined to set up a “Special Prosecution committee” to unearth corruption and arrest corrupt officials in the past governments. Some section of the public have alleged that, the intents and purposes of Akufo-Addo to commission a “Special Prosecution Committee” was to go after the “Kufour faction” in his party. 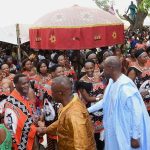