The mystery behind the death of J.B Danquah, MP for Abuakwa North, stabbed in cold blood in the comfort of his bed in February this year may soon be unraveled. There were strong indications from close associates and some spiritualists that it was a ritual murder carried out by paid contract killers but that theory quickly died when the Police arrested a key suspect.

But fresh allegations suggest the death of J B Danquah, was predetermined to pacify ancestral deities for political gain.

The latest twist is raising eyebrows especially because the manner in which the case has been handled by the Police but Founder and Leader of the Hezekiah Apostolic Prayer Ministry, Prophet KwabenaOwusuAdjei, has put his head on the table.

He maintains relations of the late MP and industrialist who had Presidential ambitions faced the untimely death to pave way for NPP’s victory in the just ended 2016 elections.

Prophet KwabenaOwusuAdjei, who claims he has been one of the Prayer Warriors of Nana AkufoAddo in previous elections is asking the Police to revisit the sad incident, conduct thorough investigations to uncover the truth else a bad omen will destroy Ghana’s future.

Addressing a news conference in Accra on Wednesday, the Pastor sounded very passionate and nearly broke down as he gave a chronology of antecedents with numerological details to buttress his claim.

The Prophet also spoke extensively on the spiritual connotations of developments.

The Pastor said though Nana AkufoAddo, Ghana’s President elect is a direct beneficiary of the mystery, there are dire consequences that may call for early Presidential elections.

“In his closing remarks when Abynya-AnsahAdjei launched a book, ‘Things Every Child Must Know about Dr J B Danquah” the late MP prophesied in the presence of NPP sympathizers that ‘ten months from now, the party will be jubilating. AkufoAddo will be moving into the Flag Staff House. Insha Allah”.

Prophet KwabenaOwusuAdjei is resurrecting the unanswered questions that dominated the media moments after the news about J B Danquah’s murder broke.

He noted,…..”On the evening of the 8th of February 2016, a day before his brutal and awful killing, J B DanquaahAdu had been in the House of Nana AddoDanquahAkufoAddo with his wife to announce the funeral arrangements of his wife’s auntie”

He further observed that when the news broke, some prominent Akyems in the NPP including Gabby AsareOtchereDarko, Nana Addo’s nephew were among the first to visit the scene. He said though it was a crime scene, Gabby did something strange when he climbed a ladder to the room with the Police looking on.

He raised suspicion about some insider act for an objective and insisted the matter cannot be left to die just like that.

“Did Hon., Atta Akyea really say that the death of J B DanquahAdu was a good omen? What about the NPP MP, for Assin Central, Kennedy Agyapong who also said the death was orchestrated within?” he asked.

“The reason why the British developed a very low esteem of Danquah was a result of his deep involvement in the ritual murder of Nana AkyeaMensah, the Odikro of Apedwa.”

“Prior to J B Danquah’s murder, he asked Parliament to pay a befitting tribute to his late father, Dr J B Danquah referred to as the ‘Doyen of Politics in Ghana, 50 years after his death. He recalled that Dr J B Danquah was incarcerated in a condemned cell and died in Prison. The MP for Kwadaso, AkotooseiAfriyie also asked President John Mahama to reverse a fiat by Ghana’s First President to let his family and nation hold a befitting funeral for for his father, a royal who could have become the Chief of AkyemAbuakwa”…the pastor recalled.

Prophet KwabenaOwusuAdjei added, “By the spirit of God in me, I cautioned and counselled them to desist from demanding a befitting funeral else they will have a real burial on their hands for the scripture that cannot be broken says in Leviticus 25:49 that, on the Jubilee anniversary if one is unable to redeem himself, one of his brothers may redeem him or his uncle or cousin may redeem him or a blood relative from his clan”.

“Kwame Nkrumah who felt disappointed lamented. They said things were tight, there was no milk or corned beef but at that time, he was building the Akosombo Dam, the Motorway, VALCO to create jobs, and the factories. And he is on record to have said that if he knew it was milk Ghanaians wanted he would have connected taps to their homes”

Prophet KwabenaOwusuAdjei believes something very strange will happen in the coming days which could seriously affect the political fortunes of the country.

He also noted that, the unresolved mystery surrounding the late NPP MP’s death has serious spiritual implications. He wants the Christian Council of Ghana, the Charismatic Council as well as Islam Clerics to join special prayers to redeem Ghana. 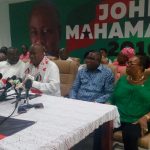