Defeated parliamentary candidate of the National Democratic Congress (NDC) in North Tongu constituency of the Volta region, Charles Senama Hodogbey, has accused Member of Parliament (MP) for the area.

He alleged that the Electoral Commission (EC) official in-charge of the primaries with the support of some party executives connived with Hon. Okudzeto-Ablakwa to, among other things, delete the names of over 7,500 members of NDC from the electoral register used on Sunday, December 21, 2015 primaries.

Speaking in an exclusive interview with Today via telephone yesterday, the aggrieved Mr. Hodogbey further alleged that the director of elections for the constituency aided the constituency executives and Mr. Okudzeto-Ablakwa to engage in the illegal act at polling stations.

According to him, Mr. Okudzeto-Ablakwa brought some bigwigs of the ruling party including the Minister of Communication, Dr. Edward Omane Boamah, Minister of Food and Agriculture, Mr. Fiifi Fiavi Kwettey, to North Tongu constituency last Sunday who openly distributed cash to potential voters to vote in favour of the incumbent MP in the primaries.

The electorate, he added, were given money ranging between GHC50 to GHC20 to vote for Mr. Okudzeto-Ablakwa.

Describing it as “sad and illegal,” Mr. Hodogbe said there are no proper laws in Ghana.

“If this illegal act of vote buying in all the 109 polling stations had happened in America the perpetrators would have been jailed by now,” Mr. Charles Hodogbey told Today in an angry tone.

What is very annoying, according to the disgruntled Charles Hodogbey, was how the officials of EC and director of elections of NDC in the constituency prevented majority of potential voters in the six recognised traditional areas within the constituency namely, Mepe, Volor, Juapong, Fordzorku and Dorfor-Adidome from voting.

According to him, when the party members got to their various polling stations to cast their ballots, they were shocked to learn that some unknown persons had already cast the votes on their behalf.

He alleged that the act was done in advance before polls opened.

He, therefore, called on the leadership of the NDC to set up a committee to investigate the matter.

The former MP castigated Mr. Okudzeto-Ablakwa for “hijacking NDC party for his own interest,” which he claimed had brought divisions among the supporters and members of the party in the area.

According to him, the constituency executives, who were not permitted by the constitution of the NDC to support any aspiring parliamentary candidate were openly spotted in T-Shirt embossed with Mr. Okudzeto-Ablakwa’s effigy campaigning for the incumbent MP.

That, he added, did not stop and continued on Sunday during voting as the constituency executives openly displayed Ablakwa’s images.

He further alleged that Mr. Okudzeto-Ablakwa undermined the image of the NDC in North Tongu,

He accused the MP of preventing competition in North Tongu constituency in regard to the parliamentary seat and could not understand why Mr. Okudzeto-Ablakwa should take the whole of North Tongu to ransom.

“Only those who do not want peace in North Tongu constituency will vote for Samuel Okudzeto-Ablakwa in the 2016 polls. We will never vote for such a person. We know what we want in life,” but Mr. Hodogbey was quick to add that he would campaign massively for President John Dramani Mahama to win the 2016 General Elections.

Although the voting of the parliamentary primaries in North Tongu which took place on Sunday witnessed a low voter turnout, Mr. Okudzeto-Ablakwa managed to poll 9,855 representing 84.45% of the total votes cast.

There were 187 rejected votes representing 1.6%. The total votes cast stood at 11,482. The constituency has a registered voter population of 17,070 who cast their ballot at 109 polling centres.

Attempts made by Today to reach Mr. Okudzeto-Ablakwa for his side of the story proved futile as he failed to answer calls made to his telephone on Wednesday, December 23, 2015. 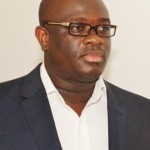