Ghanaian movie stars Roselyn Ngissah, Kafui Danku, Francis Afotey Mensah and film crew members who worked on a Christian movie titled “The Wife”, are set to tour Canada and some selected European countries for the premier of the movie.

The Toronto premiere, which is set to come on on Saturday October 31st 2015, is said to be the first African Christian movie to be premiered at the Presbyterian Church of Ghana in Toronto by Florex Entertainment in collaboration with Canadian Urban African Group.Speaking to the producer of the movie, Francis Afotey Mensah, who doubles as a professional footballer, he said that though the movie was shot somewhere last year, the release or screening of the movie has delayed because he and his production team have been working on the technical bench in order to bring out the best quality to movie buffs.

According to him, now that the movie is ready for release, they have decided to tour the world with the movie, which portrays all the details one needs according to know according to Christian and marriage doctrines.

Mr Francis Mensah explained that, apart from the Canada premiere on Sat 31 2015, they will also premiere the movie in Ghana on the same day.

“On the same day, we are going to also premiere the movie in Ghana whiles our Ghanaian reps monitors it, we are going to premiere it in many churches we can in Accra, Takoradi, Tema, Koforidua, Cape-Coast, etc. as well as some selected European countries.” He said.

In a separate chat with Roselyn Ngissah, she revealed to MustaphaInusah.Com that she’s glad to be part of the shooting of the movie because is a Christian movie which teaches Christian values and norms.

She added that in recent times, it’s very difficult to see producers shoot educative Christian movies with didactic themes because they think such movies wouldn’t sell.

“Every producer want to make profits so normally that’s why most producers shy away from shooting Christian movies, but I believe it has its market – so it’s one area I will urge producers to invest in” Roslyn advised. 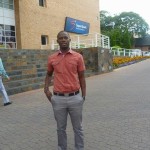