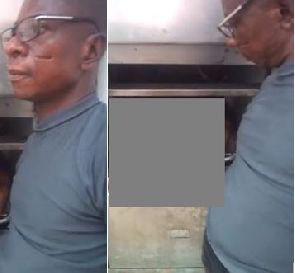 General Overseer of God’s Crown Chapel, Prophet Reindolph Oduro Gyebi has made a startling revelation about the video in which a mortuary attendant was seen “fondling” the corpses of dancehall sensation Ebony Reigns and her friend Franky Kuri.

The widely circulated video has been widely condemned by the public with some calling for the arrest and possible prosecution of the mortuary attendant who is only identified as Ebenezer, for disrespecting the dead in such a manner leaving the mortuary man no choice but to go into hiding following reports that the police is in search for him.

Sharing his thoughts on the issue, Prophet Reindolph Oduro Gyebi commonly known as the Eagle Prophet in an exclusive interview on ‘Maakye’ educative show on Hot93.9FM, disclosed that, the condemnation being meted out to the mortuary attendant is not necessary since everything is highly a spiritual affair.

According to him, the video is part of a spiritual requirement someone close to her has been given to tie the spirit of the dancehall artiste as a means of preventing her from going after those responsible for her demise.

“Nobody should blame the mortuary attendant. The video was released by somebody close to her, the issue is a highly spiritual matter. The ghost of Ebony will haunt some people because someone close to her wants to tie her soul as part of the requirements to prevent the ghost of the girl from doing what she has to do. So the police should stop looking for the mortuary attendant he is not to blame for the video,” he told Boamah Darko.

Although he failed to mention any names, the Prophet called on the family of Ebony to be silent and seek for answers beyond the physical.

“I have personally seen this girl in my vision for more than 14 times trying to send a message across so I urge the family to seek for answers in the spiritual realm.” He added.