Former Minister of Finance under the erstwhile National Democratic Congress, Kwesi Botchway has described instance mob justice as “the lowest possible point a nation can get to.”

He made the comments in an interview at the forecourt of the state house in Accra.

“It is just the lowest possible point you can get to as a nation. Such cruelty and such bestial. It was devilish. I think we have to master all the resources we have as a nation and deal with this resolutely.

Inspector General of Police Asante Apeatu and Obed Akwa, the Chief of Defence Staff salute Major Maxwell Mahama (Pulse Ghana/Isaac Osei)
“I think that all of us as Ghanaians should devote a day in our hearts to ponder over what has happened and rededicate ourselves to a life of civility, kindness and love as a people. It is just shameful.”
He especially commended the unity that has been displaced by Ghanaians of various backgrounds to in the condemnation of the murder of the soldier.

He added, “I can see Major Mahama’s death has brought all right-thinking people are appalled by what has happened and maybe this is the moment of unification and cleansing as a nation. I feel terrible and she is my niece and we are all grieving and it just dreadful what happened to the fine young man. Nobody deserves what has happened to him.”
Maxwell Adam Mahama was lynched on Monday, May 29, 2017 by residents of Denkyira Obuasi on suspicion that he was an armed robber. Over 40 people have been arrested in connection to the death of the soldier. 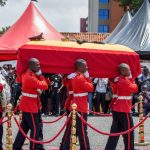