The Minority Leader in Parliament, Haruna Iddrisu, has lauded the free Senior High School (SHS) policy which officially took off yesterday across the country, describing it as a “noble” objective but unsustainable.

He argued that, the mode of financing the policy was not sustainable in the long run.

“My emphasis is that let us not pursue this noble objective which is important for the future of our students and dear to the parents hearts with experimental financing. Our position is one for which we are not asking for vindication today, we will be vindicated with time,” he said hours ahead of the official launch of the free SHS policy at the West African Senior Secondary School (WASS).

According to Haruna Iddrisu, about 564,000, continuing students will not benefit from the policy, because only fresh students are being covered under the programme.

The Minority had earlier asked the New Patriotic Party (NPP) government to apologize to Ghanaians for refusing to capture continuing students onto the free SHS education policy.

Akufo-Addo in his 2016 manifesto stated emphatically that he will “redefine basic education to include Senior High School (SHS), covering vocational, agricultural and technical schools, and make it available for free on a universal basis to all Ghanaians.”

The Minority, at a press conference on Monday, said: “if the NPP had any modicum of respect for the good people of Ghana, they should at the very least be apologizing to Ghanaians for their inability to fulfill the promise for which they were voted.”

Haruna Iddrisu ,who addressed the press conference said: “The continued claim by President Akufo-Addo and his acolytes that they have fulfilled their Universal Free SHS for all promise is simply hypocritical.”

The Minister of Education, Dr. Matthew Opoku Prempeh, at the launch disclosed that, in making sure the Free SHS policy does not run into challenges, government will always ensure that pay 20% of fees for beneficiaries is disbursed in advance before every term begins.

Dr. Opoku Prempeh, said this decision would ensure that second cycle institutions, continue to run smoothly and for the sustenance of the programme.

The Minister also stated that, capitation grants for some institutions in the country which have been in arrears for quite a long time, are being cleared by government.

“Capitation grant which has always been chronic areas will be paid up to date even for the first term of this academic year is ready. With feeding grant, we became a nation that we were so merciless that even schools for the special schools we had arrears. Feeding grant for the handicapped schools are going before the school reopens. Feeding grants for students from northern extraction are going this year before school reopens.”

He also added that “teacher trainee allowances have not only been restored, it’s going before reopening.”

On his part, President Akufo-Addo, believes that the country will be better off in the future with the full implementation of the Free SHS programme.

According to him, the policy programme is a useful investment in the youth which will eventually drive Ghana’s economic transformation, adding the program will be funded from proceeds of the country’s natural resources.

“We have chosen to invest in the future of our youth in our country. We’ve decided to use the proceeds from our natural resources to help educate the population to drive our economic transformation… The most equitable and progressive way of using these revenues is to educate and empower our population to strengthen our nation,” Akufo-Addo said.

“We have a sacred duty to our children and other generations beyond in ensuring that irrespective of their circumstances, their right to education is preserved. That is why my government has decided to absorb all Senior High School fees that have been agreed between the Ghana Education Service Council and Conference of Heads of Assisted Secondary Schools. I want every Ghanaian child to attend Secondary school not just for what they learn in books, but for the life experiences they get,” Akufo-Addo added.

He indicated that the government was committed to ensuring that quality education is not compromised in the program.

He said, quality education was a major focus of the programme, although it is keen on ensuring that the programme expands access to Secondary School by Junior High School graduates.

Nana Akufo-Addo added that, the government was collaborating with some development partners to build the capacity of teachers to ensure that they effectively carry out their mandate.

The Free SHS programme is a long-held campaign promise of the NPP before it came into government in January 2017.

Then flagbearer, Nana Akufo-Addo, used the programme as his flagship campaign message in the 2008 and 2012 elections, but failed to secure the mandate of Ghanaians in both polls.

In December 2016, however, riding on the back of the Free SHS campaign message, Nana Akufo-Addo, was voted into office as President of Ghana.

Among his early public statements after his inauguration, President Akufo-Addo indicated that, his government was working hard to implement the policy programme from the 2017/2018 Academic year starting in September. 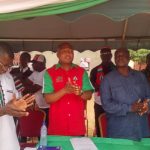