Minister for Local Government and Rural Development, Alhaji Collins Dauda has been accused of receiving bribe to influence the nomination of Kweku Afrifa Yamoah Ponko as Municipal Chief Executive for Ejisu Juaben.

According National Democratic Congress (NDC) parliamentary candidate for Ejisu Juaben Gloria Huze, the Minister received a whopping sum of GHc400,000 from the nominee.

Members of the NDC last week asked the President to choose between their allegiance ahead of the 2016 general elections and the nominee.

Speaking in an interview on Nhyira FM, Mrs Huze said the Local Government Minister nominated Yamoah Ponkoh at the blind side of the President.

She expressed shock at the re-nomination of someone who brought the name of the party into disrupt.

Gloria Huze indicated that, the conduct and actions of Yamoah Ponkoh as then MCE only affected the chances of the NDC and if confirmed it cause havoc in the constituency.

When pushed to provide prove, the Ejisu Juaben parliamentary aspirant claim the nominee [Ponko] told her of the bribe he had to pay to Collins Duada did to get the nomination.

Gloria Huze is convinced President Mahama will heed to their plea and withdraw Yamoah Ponko’s nomination.

Meanwhile the NDC constituency office in the Ejisu Juaben constituency is holding an emergency meeting to foil any attempt to get Yamoah Ponko confirmed as MCE. 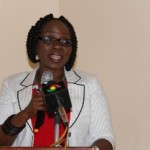