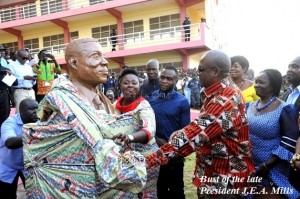 The Ashanti Regional Chairman of the opposition New Patriotic Party (NPP), Mr. Bernard Antwi Boasiako, popularly known as Chairman Wontumi, has expressed disgust at what he says was a grotesque portrayal of the late President John Evans Atta Mills in a statue erected at the Atta Mills Senior High School, located at Ekumfi Etuam in the Central Region.

Chairman Wontumi said he was shocked to see the poor nature of the statue erected in front of the school, ostensibly to honour the late President, and questioned why President Mahama would sit and allow the personality of his late idol to be discredited.

“I had to watch this statue for some time before identifying it was that of the late President Mills. The only way I could identify that statue was reading the name or inscriptions the statue bears. In the first moment, I asked myself, why could they allow this to happen? Can’t President Mahama just do something nicer to show his respect and appreciation for the late Mills?” the NPP Chairman queried.

He contended that the poor nature of the statue clearly depicts the kind of respect this current administration has for the late President, adding, “it’s unfortunate, because, I feel that, if not for anything, the late Mills reposed lots of confidence in President Mahama, even at a time when some people in his NDC doubted his capabilities and abilities to partner him as veep.”

Chairman Wontumi, therefore, opined that it was imperative for the President to have shown respect and duly honoured the late President as he deserves.

“This form of statues only tells us how much the late President Mills isn’t appreciated by President Mahama,” Chairman Wontumi stated in an interview.

The NPP Chairman further asserted: “It is so sad, and sometimes, I ask myself, was it a sin the late Mills committed making President Mahama and his Vice President? It’s regrettable, and I just can’t believe all dignity, honour, chances and respect late Mills gave President Mahama had never been returned to him or his people.”

The NPP Chairman stated he is not only saddened by the action of the President, but shocked at Koku Anyidoho, the Deputy General Secretary of the NDC, “whom I have always known him to be a ‘darling servant and a son’ to the President Mills.”

“I couldn’t believe that Koku can allow that to be done to his late boss, unless he tells us he hasn’t seen it,” Chairman Wontumi questioned.

He, therefore, called on President Mahama to do the honourable thing by pulling down the poor monument and erect a nicer and more deserving one.