Dr Cadman Atta Mills has made startling revelations about the tenure of his brother, the late J.E.A. Mills as President of Ghana.

2017, on Starr Chat that he regretted not spending a lot of time with the former president.

Born at Tarkwa on July 21, 1944 and was educated at Achimota School and the University of Ghana, Legon, Mills died at the 37 Military Hospital on July 24, 2012.

He was laid to rest at the Asomdwee Park off the Osu castle Drive in Accra.
Shedding light on the affableness of the late president, Dr. Mills said he could have been a “better brother” and that “entrusting [late Mills’] physical and emotional well-being to others” and his younger brother was an unpardonable mistake he committed.
He said anytime he returned from his trips he would come back and meet the former president “lonely.”

“I would come back and I would realize that he was a very lonely man…extremely lonely man…Oh! My God I would go to his quarters in the castle which were not really basically fit for human being to live in. I mean my God and he will be sitting in this chair very quietly,” he told Starr Chat host Bola Ray.

He said there were times he would have to call people that he knew were the late president’s friends and “tell them that please come and visit him.”

Asked if the late president would have been alive if he was not the president, the renowned economist shied away from that conspiracy theory saying “I don’t like to go there.”

When asked whether he missed his brother, “I miss him enormously. I also have regrets”.

“I could have been a better brother. I spent a lot of time during his presidency travelling and basically, I entrusted his physical and emotional well-being to others and my younger brother”, he explained. 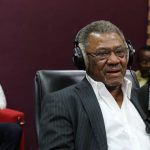