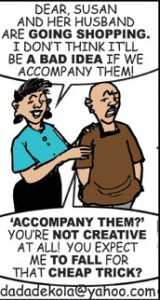 The noise must have woken many people up, for it was just few minutes after midnight.    I had just risen from my first round of sleep, and was still trying to gather my wits together and figure out what to do with the next three to four hours before I crawl into bed again.    The voices were very loud and clear and I knew that they were coming from my compound. They belonged to The Jones. They all seemed to be shouting and wailing at the same time, father, mother and children. Initially, I thought it was an armed robbery attack as Mrs Jones was wont to come home late every night, Even though she ran a little video shop on the same street. But when I finally got the gist of it, I wondered if it would not have been better if it were an armed robbery attack. Besides, there was hardly much difference between an armed robbery invasion of one’s residence and what had taken place. Mr. Jones had brought home his lover!

But why would anyone bring a girlfriend to the place they share with their family? Is it for lack of money to rent a hotel room even for a short time? Or if he could not vouch for the safety of his family overnight at home and alone, while he had his fun time somewhere in or out of town, must he do it in the night? Why not stick to day time? And what about the lady? Is it that she has no brains? What if the woman of the house decides to act up and wreak havoc on her or even both of them? Above all, can’t these women just put themselves in the shoes of the poor women?

Even if the saying that an erect penis often lacks shame, must it also sacrifice all honour and self respect? Indeed, Mr. Jones had not only defiled his matrimony, he had disrespected his wife and four children with his reckless decision. The unfolding drama was just too hot for me to miss, so I quickly changed into something more decent and dashed down the stairs before anyone could stop me.

The gist according to Mrs. Jones was that she had been informed by some good friends in the neighbourhood that her husband was dating a certain young lady around. (who farms around the home? Nonsense!)    Naturally, women are more resilient and can control their emotions better than many men. Most women can pretend they know nothing of their men’s escapades even though they have all the necessary information to nail them. So, Mrs. Jones had to bid her time, and began conducting her own investigations. In the meantime, Mr Jones only grew bolder by the day and stepped up his acts. He decided to turn his home into a sleepover camp and began bringing his lover home.

This, Mrs. Jones refused to accept. That night, she pretended to have gone to bed early to allow him make his arrangements and when the girl slipped in, she burst their bubble. Unfortunately, the girl escaped with Mr. Jones’ assistance, of course. If he felt ashamed of his actions, it was difficult to tell. He kept ranting, struggling with words to ensure himself a safe landing for himself. A drowning man would clutch to stray if he believes it can keep him afloat. He called his wife a bad woman for exposing his bad deeds in public. That night, Mr. Jones lost a few notches off the respect I had for him.

The world is full of men who reason with their sex organs more than they do with their hearts or brains, after all, their manhood is believed to define them. A man with his heart and brains screwed together will be a decent man and live a decent life, whether he is a monogamist or polygamist. Taking a second or third wife is quite different from turning your home into a  banboat  (whore house) as my late grandmother would say. Once married, a guy loses the liberty to bring home other women into the sacred temple he shares with his wife, never mind if he had brought a thousand others there prior.

Womanising is not cheap and if you wish to play the game, you must be prepared for the terrain. No one tells a child not to contract leprosy as long as he is prepared to be ostracised into the bushes. A man might be the head of the house, that does not bestow the right to do just as he pleases him. A woman runs the house, turning it into a home and she cannot do so effectively if she is not accorded the respect and honour to meet that responsibility.    Mr. Jones in his bid to seek satisfaction for his aching groin, threw caution to the wind on several counts which included; dishonouring and shaming his wife in their neighbourhood because of the relationship which was too close for comfort.

Had he never heard of the slang, mo sa fun e to? (I chose a safe distance). Next, he defiled the sacredness and spirituality of their matrimony and family bond. Thirdly, he dishonoured himself in the eyes of children who must have held him in high esteem before that fateful night. Mr. Jones’ children might be young, but what they witnessed that day is not likely to wipe off from their memories ever , no matter what he does.

For my twin friends, it was not an experience they can recall but a part of the painful stories their mother told them about what led to their separation from their father at a very tender age. Their father had not only been a serial abuser, but a real crank head. The duo met shortly after he left secondary school but she had little or no formal education at all. His plan had been only to scope her and walk away, but she got pregnant and they were forced to live together as husband and wife, especially when it was discovered that she would have twin babies.

As expected, life was pretty difficult after the twins’ arrival as they were solely dependent on their father and support from his parents. But he made things even worse for their young mother with constant abuse. Regularly, he would bring all kinds of women to the only room they all shared and ask his wife to excuse him with the children. Their mother would be forced to sleep in the passage with them till the VIP guests left. Refusal to comply earned her serious beatings. He made it clear that they were a great disturbance to his life, the fact that they were both female only made him more angry.

The landlady took pity on them and would sometimes allow them sleep in her room. With her help, the young mother started a little trade and eventually saved enough to move out of his one room “mansion” where he reigned supreme.    It was shortly after that she met the man who later became her husband and gave the twin girls his name. Both women, university graduates, are now married and blessed with their own families. They insist they would not have believed their mother’s stories but for the fact that she later took them back to him when they gained admission into secondary school.

She had gone to plead with him to help augment their school fees but without even blinking an eye, told them he had no money and was not interested in educating any girl child. Once again, he failed to embrace the second chance offered to him on a platter of gold by the Almighty, denouncing God’s free gift in his life. Today, he has grown into a grumpy young but old man, wifeless and childless, but still chasing after skirts! For this man is still in his early 50s.

If my friends’ mother could summon up the courage to walk out of her abusive and traumatic relationship, this aunt of mine was either not so lucky, or was simply comfortable with it. Now when I look back, I believe that her inability to conceive a child right after marriage must have contributed essentially to all the sacrifices she had to made to remain with a randy husband. Marriage for her was a mean and intense competition with all manner of strange women while her husband had max use of his libido. She finally had one child and a second wife had another two before walking away too, leaving both her children “in their father’s house” for my aunt to raise.

My uncle subsequently became a serial womaniser, bringing home his girlfriends at will. He eventually brought home a young girl who for almost four years became a fixture in his life. My aunt tended to her like a god but she was barely older than her teenage daughters. She served them meals, placed bathing water in the bathroom for them and would even make the bed after them. This young girl was in school but she would come for weekends in a married man’s house where his family also lived. What an affront? But little did we know that the crafty girl also had other lovers and never planned to marry my uncle.

He was only her meal ticket while she needed him. No one knows how they settled between them but once again my aunt became chief organiser of a grand wedding ceremony for her husband’s lover. One would think he was her blood relative as he practically footed the wedding bills. He bought a cow, rented the hall, bought wedding clothes and even the clothes for the bride’s parents. It was a big surprise to discover that this girl had parents, for real!! My aunt and children attended, (they dared not) giving him all the support. Instructively, this would be his final quest for whatever he was searching for outside of his matrimony.

Years after, this man would confess that he was just being rascally. That he knew his wife would never leave and that his actions were part of life’s experiences when he was in the world. As for my aunt, she would insist she was attending to her husband and his guest as it was her duty to do so. The irony is that my aunt and her husband still look pretty damn good and happy together! Hmm!    Do have a wonderful weekend! 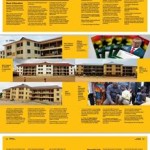