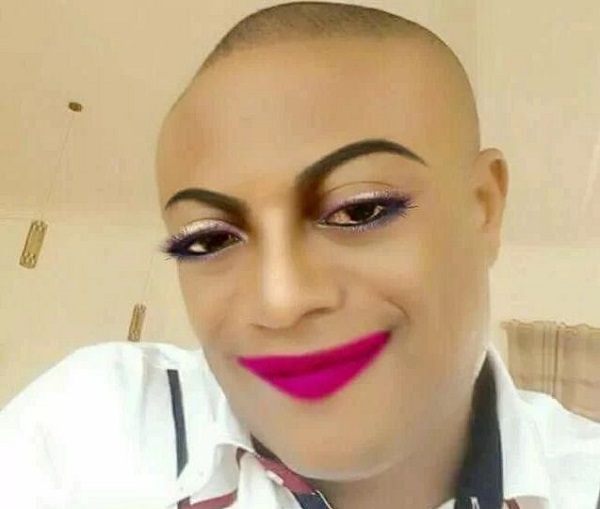 Lawyer Maurice Ampaw has posed as a “homosexual” in recent photo

This follows President Akufo-Addo’s recent argument that Ghana’s culture is not yet opened up to the human sexual orientation called homosexuality.

Controversial lawyer, Maurice Ampaw, has been captured in a strange photo understood to mock persons speaking against gays and lesbians.

The lawyer forms part of several analysts who claim Ghanaians got Nana Addo all wrong regarding an interview he granted to Aljazeera English.

On his official Facebook post, the celebrity lawyer posted a picture of himself as a stereotype of homosexuality captioned “say no to gayism”.

Meanwhile, immediate past minister for sports, Nii Lante Vandepuye, says he knows of some homosexuals at the seat of the presidency.

The former minister under the erstwhile Mahama administration says he was not surprised at Nana Addo’s comments on homosexuality to Aljazeera.

According to the NDC firebrand, there are “people at his backyard engaging in the abominable act” and that he has enough proof to reveal their names.

There is a spark of debate on homosexuality after the president of the republic, Nana Addo Danquah Akufo-Addo granted an interview to Aljazeera over the sensitive topic.

When asked why homosexuality still remains illegal in Ghana, Nana Addo argued that Ghana’s culture is not yet opened up to the human sexual orientation called homosexuality.

Meanwhile, the information minister, Mustapha Hamid, says legalising homosexuality could possibly happen in “100 years to come” and that, “there is no way it will be legalized now or in the eight (8) year rule of President Akufo-Addo.” Adding his voice to the debate, Speaker of Parliament argued that Ghana’s religious society is not ready to permit homosexual acts.

“It would be appalling to witness the marriage of two people – one with a moustache, the other with a beard. Ghanaians are also Christians, Ghanaians are Muslims. It is clearly against the Christian [and Muslim] principles. So where will it pass to come.” He quizzed.

YEN.com.gh had earlier told the news of how a former school prefect of the Achimota School married his American gay boyfriend after years of being together.

Also, a group of 8 Ghanaians in Canada is seeking out signatures to pressurize government of Ghana to respect the rights of the LGBT community – a development which has seen several Ghanaians lash out at them on social media.

Being gay in Ghana comes with grave challenges with the most brutal and deadly been mob justice – a development which continues to see the LGBT community in Ghana always in hiding.