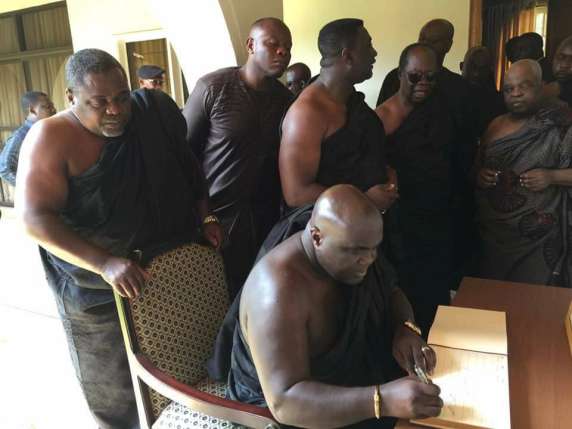 The Chief of Staff at the presidency, Julius Debrah, says the massive infrastructure development that has been put in place by President John Mahama will provide the anchor for job opportunities.

He has, therefore, given an assurance that the next National Democratic Congress (NDC) government will focus on creating more job opportunities through deliberate policies to transform the lives of all citizens.

At an interactive session with the clergy in Accra last Wednesday, the Chief of Staff said: “The infrastructure ranging from good roads, energy resources, healthcare facilities, Information and Communication Technology (ICT), to water resources have been laid already during the first four years. This will provide an opportunity for small-scale and Medium Enterprises (SMEs) to thrive and create job opportunities.”

The team, led by the Chief of Staff, included some key figures in the NDC; the Greater Accra Regional Minister, Nii Laryea Afotey Agbo, Greater Accra Campaign Coordinator, Sylvester Mensah and a Minister of State at the Presidency, Elvis Afriyie Ankrah.

Mr. Debrah explained that the import of the meeting with the clergy was to officially inform them about President Mahama’s second term presidential ambition and to seek their support and prayers for an overwhelming victory.

He underscored the important role the clergy had played in fostering national peace and cohesion and called on them to pray for a peaceful and violence-free election.

“I want to also reiterate that the NDC and President Mahama will remain committed to the decision to accept the outcome of the December polls no matter the situation,” he stated.

Reacting to the pockets of violent clashes between supporters of the NDC and the New Patriotic (NPP) in some parts of the country, Mr. Debrah observed that such violent acts did not promote democratic governance.

To avert a recurrence of such violence, he urged supporters of the NDC to stay away from attacking and insulting political opponents, adding, “Ghanaians want to know how they will get a place to sleep and how they will get money in their pockets; so let us campaign on issues.”

A leading member of the NDC and former Minister of Local Government and Rural Development (MLGRD), Prof. Kwamena Ahwoi, said the party was committed to working for the development of the country as exemplified by the bold measures President Mahama took in difficult moments.

He said this year’s election was about a choice between a tried and tested President and others who were promising to do what had already been initiated.

“In the early post-independence days, every African wanted to be called a Ghanaian because the country was on its feet and a good place to be. The NDC wants to return Ghana to those glory moments again,” he added.

Taking turns to make submissions, the members of the clergy lauded the initiative by the NDC to interact with them, saying God had answers to all human needs, including choosing a worthy leader.

The President of CICG, Apostle Samuel Teye Doku, while, condemning the recent violent clashes between the supporters of the NDC and those of the NPP, urged the parties to be wary of the fact that it was God who chose leaders.

“As for the clergy, we will continue to pray and ask for God’s intervention in the election. But whoever, God chooses should be seen as the destined leader of the country,” he added.

The clergymen called on the security agencies to step up their efforts to protect lives and property as the election campaign enters its final stages.