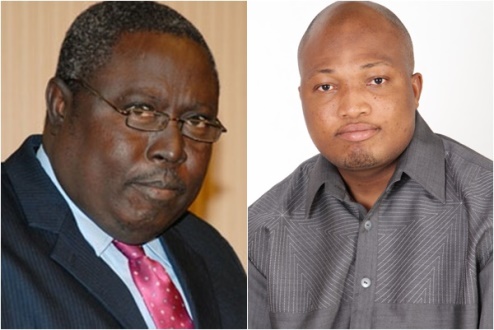 The author of an article that caused former Attorney General, Martin Amidu to descend on a former deputy Education Minister, Samuel Okudzeto Ablakwa, claiming the latter was the writer of the article has owned up.

Andrews Amadi Krow, who claims to have originally written the article, said he was not contracted or paid by Mr. Ablakwa to write the piece on Martin Amidu, but his work was as a result of his personal observations about the former Attorney General.
Related stories

I’ve not attacked Amidu in any article – Ablakwa

‘Mischievous’ Ablakwa insulted me using a pseudonym – Amidu insists
Martin Amidu earlier this week took on Samuel Okudzeto Ablakwa, describing him as “uncouth” when he responded to an article titled, “Martin Amidu, Is he a Contrarian..” written by one Ohenenana Obonti Krow.
Okudzeto Ablakwa in a Facebook post expressed shock at the attack by Martin Amidu, saying he was in no way connected to the article, but Martin Amidu in another statement, said he was certain the article was written by Mr. Ablakwa under the pseudonym “Ohenenana Obonti Krow”.

But Andrews Amadi Krow, in a letter to Martin Amidu copied to citifmonline.com, said Martin Amidu’s hasty criticism of Ablakwa that he was the author of the article “confirm the assertion I expressed in my articles that your accusations were baseless.”

Read Andrew Krow’s letter to Martin Amidu below:
Greetings Mr Martin Amidu,
I am Andrews Amadi Krow (Ohenenana Obonti Krow ) the sole author of the two articles “Martin Amidu, Is he a Contrarian..” and Martin Amidu And His Hate Agenda” which were published on modernghana website. I am a full blooded Ghanaian and a member of the Great Akatamanso Family.
My voters ID number is 5407008100 with the name “Andrews Amadi Krow” registered to it. I also use the name (pseudonym) “Ohenenana Obonti Krow” on social media, a name known to all comrades and my friends on the various social media platforms.
If I write an article, submit it to a respected professional journal or an editor, and have it accepted for publication, I own the copyright in the published article.
My articles are not “work for hire”. With the facts provided, a threshold question, therefore, in determining ownership of the article would be to determine if the articles were specifically ordered as a contribution to a collective work and there was a writing indicating the intention that it be a work for hire.
I started writing on political issues since 2011 and have been doing so based on my independent assessment of happenings on the political landscape. I have many articles published on some online websites in Nigeria, Gambia, Sierra Leone all authored in my name. I decided never to respond to your articles because of the huge respect I have for you.
However I had to shift from my earlier position after reading your latest article on Mr Bryan Buabeng’s wall. Bryan is one of my very good friends on the other side, a young man I admire and respect so much.
Mr Amidu, “The Socialist Institute” recently honored me for supporting our party’s social media communication. It was organised at Tamale and was graced by the NDC regional chairman, regional executives, the former Municipal Chief Executives and other party officials. I received the award as “Ohenenana Obonti Krow”.
All present saw Andrews Krow (Ohenenana Obonti Krow) not Hon. Samuel Okudzeto Ablakwa.
My mother passed on few years ago and the funeral was held decently. All who attended the funeral did so because of Ohenenana Obonti Krow not Hon. Samuel Okudzeto Ablakwa.

YOUR FALSE ACCUSATION AND ITS IMPLICATIONS
This is an egregious error, a product of always a “constant vilification without checking your facts” in which attacking colleagues often supersedes getting it right. With little information, you form strong and unshakable opinions and proceed to take unwarranted actions against NDC faithfuls with your false accusations.
These few days, practically confirm this assertion. This also goes to confirm the assertion I expressed in my articles that your accusations were baseless. Prof. Mills was scapegoated with same fake stories and false accusation that caused the good Prof unbearable pain till he said goodbye.
In office, you tortured Mr John Mahama with words more deadly than thermonuclear ballistic missiles and still on same agenda after leaving office. This goes to suggest that all the accusations you levelled against Prof. Mills and John Mahama, were false. So far, you’ve not been able to substantiate any of your wild and salacious allegations with evidence and it has always been the usual long thesis.
Mr Amidu, making a false accusation in public is an aggressive act. Well packaged lies can hide sadistic impulses but the divine truth is that time takes away the sting- people will eventually figure out the truth. The NDC will surely be stronger, better, savvier after it gets out from under this turbulence it did not create. God be with you, wherever you’re.
Thank you sir
–
By: Jonas Nyabor/citifmonline.com/Ghana