Mr Martin Amidu has remained in the news for his usual fiery exchanges with his party, his political friends and more recently when in stated in one of his articles that the NDC planned with the EC boss Madam Charlotte Osei to rig the 2016 Presidential election.Politics in its nature is highly controversial with a lot of intrigues, deceit, confrontations and a whole lot.

Martin has almost attacked everybody in the NDC who disagrees opinion he expresses.

What I know is that if one challenges or questions your views, it’s to try and understand why it is you hold that particular view and may be, help me you understand why he holds his. We agree to disagree that should be the guiding principle. Sadly, discussions with Martin involving controversial topics devolve into denigrating a bogeyman, and he always directs vitriol and hatred at those who do not support his position. You either support Martin’s “holy principles”, without question or you corrupt with little room for discussion or nuance. In politics we have people who always look for ways to pull a house down when they are not the one controlling it. Such characters always benefit from the misfortune of others and they live with the impression that they are the wisest persons in their political parties. Let it be firmly impressed upon the minds of any supporter of the NDC that people who openly denigrate the party and always seek to raise the party’s main opponent above it are enemies of progress and threat to the party’s survival in opposition. Before us lie the open grave either we jump over it, walk around it carefully, or fall into it. Traitors are not easily conquered. But let’s come to the main topic. Who is Martin Amidu? The man has played different roles on the political landscape for his party and country and to get the right answer, we must assess his contribution to the politics

In the 2000 elections he was Prof. Mills’ running- mate. The NDC lost that elections to the Npp. Martin declared himself the Shadow Vice-President of the Republic. He almost inserted his own article into our constitution and vehemently defended legitimacy of that office forgetting that other parties apart from the NDC and the Npp contested that election with all of them having running-mates. Can you imagine the challenges Ghana would have gone through with so many shadow Vice-Presidents if the system had accepted Martin’s phenomenon.

In 2001, hauled President Kufour and four of his new appointees to court for interpretations and determination, over an alleged unconstitutionality in appointing his staff. By a majority decision of six to three the judges struck out his case on legal grounds, based on preliminary objection submitted by the then Attorney General and Minister of Justice Nana Akufo- Addo.

He made a claim that President John Mahama personally ordered the discontinuation of the application by the AG to examine businessman Alfred Woyome, over the repayment of the Ghc 51 million judgement debt paid to him. The Supreme Court once again dismissed Amidu’s claim. He accused Mr Tony Lithur and Mrs Marietta Brew Appiah-Oppong for perjury and abetment. He explained that the two’s involvement with Lithur- Brew and Co, the law firm he claimed represented Austro-Invest, the company he said benefited from the Ghc 51 million, constituted abetment abetment and perjury. He made another controversial statement that he will suspend any attempt to pursue the two because they were deeply involved with government and thus will be unwise to try and prosecute them. “Lithur, Brew and Co are so politically married and in bed with the John Mahama Government that I will be exhibiting crass inexperience and unreasonableness in prosecuting their misconduct and other acts” Amidu stated. The man who assured Ghanaians will make sure Woyome vomits the Ghc51 million, changed his position after the 2016 election. And his reason for backing down on his Woyome crusade was that the new assurance from the new government, particularly the AG , Madam Gloria Akuffo influenced his decision to discontinue the case.

Doesn’t that sound a bit controversial? An anti-corruption crusader who for many years have followed the Woyome case, discontinuing the case just because a politician had assured him will collect the money for the state. He never believed his party folks and government officials but sees appointees of the NDC as angels.

Mr Amidu landed on Anas Amereyaw Anas an investigative journalists with high international repute. Anas has his own style of anti- corruption fight but Martin said he had other motives than genuine corruption fight. He condemned Anas’s work which exposed massive corruption in the judiciary which was hailed across the world. Instead of joining Ghanaians to commend the young man, he insisted that the investigation was commissioned by the government , an accusation Anas denied vehemently. He alleged that President Mahama sanctioned the release of the results of that investigation to compromise and suppress the results involving Parliament and the government. He called the integrity of Anas into question. This was the anti corruption crusader undermining the work of another anti corruption crusader with high international repute.

IS HE A TRAITOR?

After the 2000 election defeat, some former appointees of the Rawlings administration were hauled before the court by the Kufour administration. Among them was Mr Dan Abodakpi who was an MP for Keta. Whilst his party (NDC) was challenging the Npp over what the party described as “Witch hunt” Martin said “I see nothing wrong with the conviction of Daniel Kwasi Abodakpi” and went on further to say, Prof Mills would have investigated Abodakpi if NDC had won the 2000 election.

When his party was battling the Npp administration over the controversial Africa Automobile Limited /Galloper vehicles issue, Martin turned against his government and party. On Joy FM Newsfile analysis programme whilst Hon. Okudzeto Ablakwa was explaining his government’s position and exposing certain hidden facts including the why government saw the $1.5billion claim by AAL as outrageous, Martin sent a text message to the host Kojo Oppong Nkrumah and stated that it could not have been possible that he ordered the withdrawal of the case from the court in 2001. This contracted what Mr Ablakwa had stated earlier on the same programme that government was negotiating with AAL but it seemed both parties appear deadlocked on the matter and the possibility of heading back to court was quiet high.

IS HE A CONTRARIAN

He chooses on side with little room for a nuance position. He seldom agrees with position taken by his party and will not help his party folks understand why he holds a particular view. He doesn’t only show his disagreements, but will direct vitriol and hatred at his party folks and all who challenge his “holy position”. He is the only incorruptible soul within the NDC and to a large extent, Ghana. My only advice for my senior comrade now a patriot is that, if he wonder why there is more and more protestations against his actions, he should consider how his own actions have contributed to this reality. 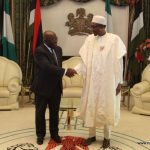