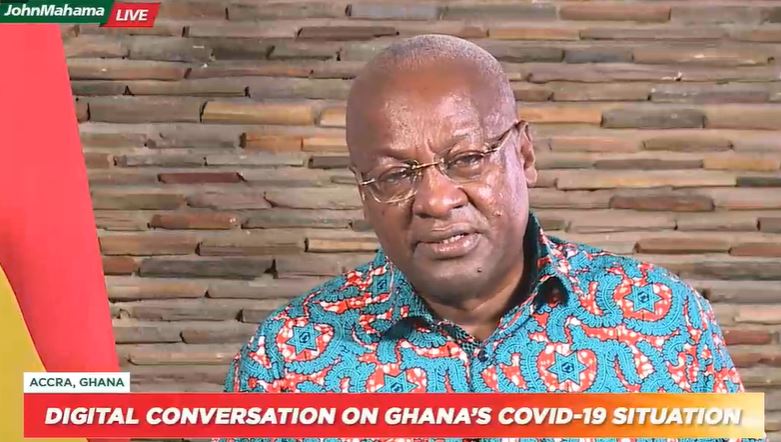 To cover their leaders poor handling of the covid-19 pandemic fight, the Npp propaganda machinery have prepared a fake report about the role Former President Mahama played in the Ebola fight and circulating it around. Leaders behave in ways that feel unfamiliar when faced with crisis. Crisis such as the covid-19 pandemic demands that leaders take an emergency response plan and adapt it as new evidence and that was exactly what H.E John Mahama did. He remained calm when the Ebola epidemic hit the region, and maintained a sense of perspective.

As the Leader of ECOWAS, it was his responsibility to determine the most reliable, up-to-date information from trustworthy new sources and experts. He avoided getting information only from his close associates and his medical advisors knowing that, information may be biased and, to a varying degree, inaccurate.

He used appropriate communication channels, and once essential information about the Ebola disease was gathered, disseminated it to leaders of the subregion, the United Nations and other stakeholders. Transparency and dissemination of accurate information were the oil that greased the Ebola fight agenda and kept it running smoothly. He provided tactical guidance, and demonstrated to his colleague heads of state and the health workers that he and his team were truly concerned, involved and knowledgeable, and on top of the situation.

Of course, the critics will find things to put out to cover the shame of the current administration. Compare Mr Mahama’s role in the Ebola epidemic fight to the shambolic performance of President Akufo-Addo in managing the covid-19 crisis and will understand why government propagandists are struggling to twist facts about the Ebola fight. Ghana, quietly, but effectively, responded to the Ebola epidemic at multiple levels. Domestically, with all our resources constraints, power crisis, low prices of our export commodities, single spine salary scheme pressure, the Mahama government’s graded response in gradually scaling up its policies without causing undue panic, ensured that Ghanaians largely rallied behind the government’s efforts culminating in the successes we witnessed.

Those who prepared that propaganda material, should have gone back to the genesis of the Ebola crisis to avoid the shame they have brought upon themselves and their pay Master. When did the said meeting being circulated around take place? That meeting took place after President Mahama addressed the UN General Assembly. Mr Mahama was the first African leader to call for a sustained, coordinated international effort to stem the outbreak of the Ebola virus which he called “Disease of Isolation”. It was that bold statement at the General Assembly which triggered the attention the epidemic received globally. Almost all leaders in the auditorium commended him for courage and boldness he displayed. I don’t know if his critics remember this statement

“Ebola is a problem that belongs to the world because it is a disease that knows no boundaries”. He announced that Accra will be the headquarters for the established UN mission for Ebola emergency response, with offices in the three main affected countries: Guinea, Liberia and Sierra Leone.

The propagandists should go for original and authentic information on the Ebola epidemic from the UN office here in Ghana and stop feeding on fake stories. Even before that initiative, government tracked down and checked those citizens who were exposed to the Liberian American in the Accra Airport’s transit lounge. Government set up rudimentary screening and temperature testing at airports and official border crossings, and procured 10,000 protective clothing suits for medical personnel to be used. Ebola isolation centers outside the capital and two more.

Mr Mahama, who was head of ECOWAS, agreed to the UN proposal to set up its regional response logistical base at the airport in Accra to allow UN experts to quickly service the three most affected countries without burdening those countries absorptive capacities at their times of extremes. Ghana had, with the US support and others help, developed a National Preparedness and Response Plan for prevention and Control of Ebola, which included establishing a cabinet level inter ministerial coordination committee.

According to the report the propagandists picked their lies, “it was unclear whether our security agencies would be prepared for possible massive investigation, quarantining and riot control”. Did our security agencies exhibit those professional skills they are known of during the crisis? That is what the propagandists should tell us not the assumptions and doubts others expressed prior to the fight. Government was able to combat the spread of the disease and its entry into Ghana because of the measures it implemented and the seriousness it attached to the fight. All that was expressed in the report including the decision to show Ghana what Nigeria had done were fears expressed. The report did not produce any concrete evidence support that claim rather, they later praised President Mahama and his government for the dexterous and diligent way they handled the epidemic.

To help the propagandists understand what went on during the Ebola epidemic fight, they should find out events preceding and after those meetings. In 2014 December, the UN Secretary General in a meeting with then President Mahama, commended the country’s leadership in supporting the response to the Ebola crisis. The UN Secretary General expressed appreciation for the effective and harmonised cooperation between the United Nations, ECOWAS and the African Union in working to stop the menace.

In November 2014, the United Nations Secretary General delivered a special message to the Extraordinary Summit of ECOWAS through our own Dr Mohammed Ibn Chambas. This was what the UN Secretary General said in that message : “I thank His Excellency President John Mahama of Ghana and the Government and people of Ghana for hosting this summit on the crisis in Burkina Faso and on the outbreak of Ebola in West Africa. I am grateful to the Government and people of Ghana for hosting UNMEER’s headquarters”. That was the image the Mahama government carved for the country.

The United States Ambassador to Ghana then, Gene Cretz, also commended President Mahama for his role at at ECOWAS Ebola High level meeting: “I want to express the U.S Government’s gratitude to His Excellency President John Mahama for his continued regional leadership as chair of ECOWAS”. The Assistant Secretary General of the W.H O then Dr Bruce Ayiward, said “West Africa was attacked by a savage virus. West Africa reacted courageously”

The Mahama government did not receive a quarter of the money this government has received since it started the Covid-19 fight campaign but the administration handled the Ebola epidemic far better than we seeing today. His philosophy :”if your neighbor’s house is on fire you have to help him to quench it. Otherwise, after it finishes consuming his house the fire will spread to your house”, guided all his actions and policies.